Real Estate - How to pick the bottom of the "Property Cycle"

What causes house price "boom and bust" cycles? How do you pick the bottom? In "The Wealth Power of Property" Fred & Brett Johnson* discuss the underlying causes of the "boom & bust" housing cycle. Property prices generally oscillate (in real terms) with a period of between 8 and 11 years, and the cycle is driven by excessive construction (greater rate of increase in available housing than the rate of increase in demand) causing oversupply and a decrease in the real (inflation adjusted) price of housing until construction drops off and the surplus stock is consumed. The next "boom" commences when shortage of supply starts to drive up prices, followed by an increase in construction as it becomes more profitable for developers. While it can be obvious that a property boom has ended, it is harder to determine when the market is poised for another period of higher rates of growth. Generally the tail end of a "bust" is accompanied by loss of convidence in real estate investing, tales of woe appearing in the papers, and predictions that they'll never be another run-up in property prices...

Picking the bottom of the cycle is easier if we use objective data to plot the cycle and see where we are. The data needed are monthly median house prices, an adjustment for inflation (CPI data), and Quarterly building approvals. As an example here is such data plotted for the Sydney residential property market: 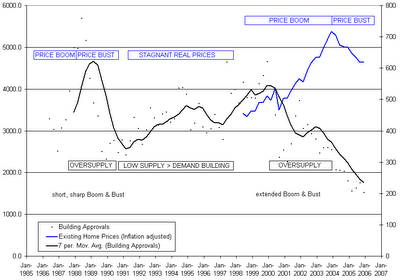 The housing boom of 1998 was very sharp, triggered by the stock market crash of '87. House prices in Sydney doubled in a couple of years, and then stagnated through the '90s.

The boom in 1999-2003 was longer, and had a slight "pause" mid-way through before gathering pace again. As repayments are more sensitive to interest rates than house prices, the lower interest rate environment of the late '90s helped prices reach a higher level in real terms and as a multiple of average weekly wage than in previous cycles.

The current slump in house prices appears to have now bottomed out, and, based on the very low level of housing construction, could start to pick up again sooner than many people think. Although house prices in Sydney are still high relative to the average wage, more home buyers are dual income families, and so can better afford higher repayments. The shortage of land available for development (based on Sydney's geography and lack of state government spending on infrastructure) could easily spark another round of price increases when interest rates start to trend down again.

* Fred & Brett Johnson own the property investment company "Quartile Property Network" which has been investing in Sydney real estate since 1953.
Posted by enoughwealth@yahoo.com at Saturday, October 07, 2006