Fortunately, although her last 'new job' lasted little more than a week, DW had another job interview later the same week, and was offered the position (which she started this week). The new job is less stressful (there are new systems to learn, but at least the business is a successful going concern rather than a shambolic start-up) and actually pays $5K pa more. So far DW seems to be settling in to the new job quite happily, and gets along with all the staff. On the positive side, the company location is slightly more convenient (about the same distance bus trip, but against the peak hour traffic flow, so a quicker trip - about 20 minutes) and it is only a five minute walk from the office to a nice shopping mall for lunch-time outings.

On the down-side, the position is only guaranteed to stay full-time for three months while an existing staff member is away on maternity leave. If the staff member chooses to not return to work (apparently she lives about 1.5 hours commute away, which may not be practical with a young child) DW's position will remain full-time, but otherwise her hours will be reduced to part-time (at least for a while). As DW's last permanent job had been part-time since DS2 was born a decade ago, she would quite like to work part-time. However, having just drawn down almost half a million loan to 'settle' the purchase of the off-the-plan investment unit she bought last year, it would be better if she worked full-time. A full-time job would allow her to pay off about $20K of the loan principal each year, plus she'd be getting more money contributed into her superannuation.

We'll see how this job works out in the long term...

Subscribe to Enough Wealth. Copyright 2006-2017
Posted by enoughwealth@yahoo.com at Thursday, August 10, 2017 No comments:

Cataract Surgery - one down, one to go

At the start of last year I noticed I was tending to polish my glasses a lot, as the right hand lens often seemed to be a bit smudged. So I wasn't particularly surprised when the optometrist confirmed during an eye test last March that I was developing a cataract in my right eye*. I'd also noticed an obstruction when viewing pistol shooting targets in bright light when the aperture of my shooting glasses was reduced to less than a mm. It looked a bit like a piece of fluff or organic growth in the middle of the shooting glasses aperture...

Anyhow, I put up with my right eye's vision getting progressively less clear (especially in bright light) until March this year, when I decided to get a referral from my GP to an opthamologist. In the initial check-up last month it was confirmed that I had a pretty advanced cataract in my right eye, and there were early signs of it also developing in my left eye (but so far not affecting the vision noticeably). So I decided to go ahead and get cataract surgery done on both eyes (the operation replaces the lens inside each eye, so will correct my distance vision (I currently need bifocals as I've always been short-sighted, and in recent years also had difficulty focussing on computer screens - my natural range of clear focus was restricted to about 8cm-30cm!).

I had the operation on my right eye last Monday afternoon, and was back at work on Tuesday and had a check-up on Tuesday afternoon. The results were pretty amazing - my distance vision in my right eye is now very bright and clear (better than in my left eye wearing glasses) and is pretty good down to about 2m away. Closer than that it is still in sharp focus, but unfortunately it is blurred with multiple images at close range. Hopefully that will be correctly by getting new 'reading glasses' once my left eye operation has been done in a couple of week's time.

The operation on my right eye cost about $2400, with a refund from medicare of almost $800 leaving me $1600 'out of pocket'. The day surgery private hospital fee also cost around $2000, but was fully refunded by the private health insurance provided by my employer. I expect I'll also get a bill of around $700 from the anaesthetist, but will get some of that refunded by the private health cover and medicare.

The operation on my left eye later this month will cost similar amounts, although I'll get a larger proportion of the $2400 surgeon bill refunded by medicare (due to reaching some 'threshold' amount of 'out of pocket' annual expenses).

So, the whole process has been quite successful (so far), rather expensive (even with full private health cover) and fairly painless. I could have opted to get the surgery done in a 'public hospital' under medicare, but there still would have been some 'gap' payments due, a 6-12 month waiting list for this 'elective' surgery, and no choice of surgeon. And of course in the public hospital system there are always a chance that your operation will be part of the training of a new surgeon, which increases the chances of a less than ideal outcome. Overall, when it comes to having knives inserted into my eyes, I'm happy to spend a bit more in order to maximize the probability of a good outcome!

* I'm a bit young to be getting cataracts, but a lifetime of topical steroid medications for severe eczema was a known risk factor.

Subscribe to Enough Wealth. Copyright 2006-2017
Posted by enoughwealth@yahoo.com at Thursday, August 03, 2017 No comments:

It turned out that the large dividend paid into our Vanguard Fund last month was offset by a corresponding reduction in the unit valuation, which hadn't been updated at the time I posted last month's net worth report. So I've corrected the value in networthiq for last month, and this month's figures (below) show that actual monthly change compared to these corrected figures.

After making the correction, it turns out that my NW decreased slightly last month, and again this month, mostly due to weakness in the local and international stock markets. The overall trend in my NW is satisfactory over the past 15 years, although the losses caused by the GFC and EFC basically wiped out the increment in my NW that came from my 'early inheritance' of the lake house from my parents. Due to the use of gearing in my stock portfolio (and letting the index 'put' options I had in place Mar-Dec 2007 lapse just prior to the onset of the GFC), I had to sell off a considerable portion of my geared portfolio in Mar 2008 to avoid getting a 'margin call', which 'locked in' the losses caused by the GFC. As I was a bit more conservative with the level of gearing used in my stock portfolio post-GFC, I didn't recover all my losses as the stock market recovered.

DW is again looking for a job - her latest position lasted just over a week before her 'boss' decided it wasn't working out as he'd expected. After pointing out they hadn't even provided her with a phone or computer (expecting her to "make do" with her own mobile phone and her personal laptop) and that her boss had given unclear instructions (conveyed via mobile phone when she was having her lunch break) and was never in the office to clarify what was required, the directors offered to give her a bit longer to 'settle in' to the role. But they also pointed out that the chaotic office situation would stay the same, So DW decided to call it quits and look for a less stressful/more enjoyable position. She had another interview yesterday, so I'm sure something suitable will turn up eventually. 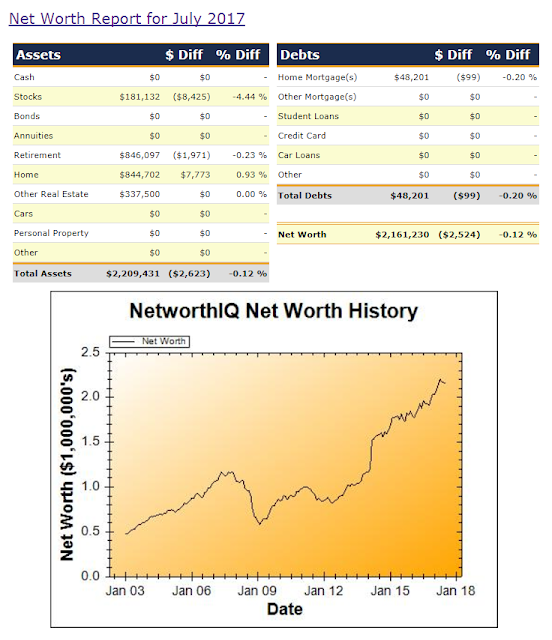 Subscribe to Enough Wealth. Copyright 2006-2017
Posted by enoughwealth@yahoo.com at Wednesday, August 02, 2017 No comments: