I finally bought a tablet

For quite a while I've been toying with the idea of getting a tablet PC. Although my laptop (Dell Inspiron) and desktop (Dell Vostro) PCs meet my needs for computing at my home office (running simulation software, data analysis, word processing etc. for my uni assignments), I sometimes fancy the idea of having the electronic equivalent of a paperback book for reading astronomy literature (mostly pdf files) and taking a few notes while in bed or in the park at lunchtime at work.

The iPad is nice, but a bit too large to suit my needs (and too expensive for my taste), and the smaller, cheaper eBook readers such as the Nook and Kindle Fire didn't tickle my fancy enough to fork out more than $100 on one. I thought briefly about buying a cheap ($169) 10" tablet PC from Kogan, but the reviews suggested that a lot of corners had been cut to meet the price point, so I'd likely be buying a lemon and wishing I'd spent a bit more on a better tablet.

The forthcoming Windows Slate looks interesting, but although it would be nice to be able to run my Office, EndNote and other windows apps using Windows 8 on a tablet and also have a 'proper' keyboard to type on, and it appears that the top-end model will cost a bit more than I'm comfortable paying. It would also make more sense if I didn't already have a laptop...

In the end the specs, price and design of the recently unvieled Google Nexus 7 were enough for me decide to put in a pre-order for the 16GB version on the day it came out. It has the paperback book-like form factor and display quality I've been waiting for to read my uni pdf files on while in bed or my lunchbreak at work. It should also be good for Skyping while moving around the house, and for running some of the free Android Apps that are available (such as Sky Map). While I probably won't use Google Docs for word-processing or spreadsheets on the tablet (I prefer typing on a proper keyboard, and mostly use Word with EndNote's Cite-while-you-write for doing my assignments), I might end up using Google Calendar to replace my hardcopy calendar hanging on the cubicle wall at work. 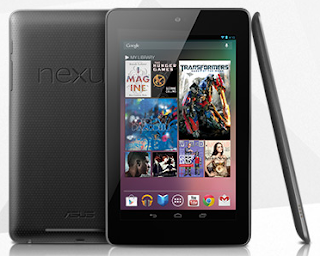 Unfortunately the AUD price for the Nexus 7 is $50 more than the USD price. I don't resent a small mark-up for Australian customers compared to those in the US (as if I ordered one from the US I'd have to pay a slightly higher delivery cost anyhow), but it would have been nice if Google had thrown in a $50 Play store credit for Aussie buyers to sweeten the higher price without eroding the higher margin Google will be getting from Australian customers. I also couldn't figure why the custom cover (an 'accessory') isn't available to order for Australian customers - if they can ship over the tablets, surely a couple of boxes of covers wouldn't be a problem?

The Nexus 7 should arrive in 2-3 weeks. I'll see if it turns up on time, and then post a review once I've played around with it. Most reviews so far appear to be quite positive, and the 'missing' features (such as 3G connectivity, a front-facing camera, memory expansion slot) aren't really needed for my intended uses.

Deleveraging out of real estate

The affordable housing organisation that had been leasing our investment rental property for the last few years gave us 21 days notice that their tenants are vacating (at the end of next week). As they will not be putting in new tenants, we would have to find new tenants for the property ourselves (via an estate agent), but since the property is about 50 years old and rather run down, we'd first have to spend quite a bit of time and money bringing it back up to scratch.

In the current economic climate in the eastern states of Australia there doesn't seem much prospect of large capital gains flowing from residential property in Sydney (average prices were down around 5% over the past year, and are likely to remain weak for a while longer), so it doesn't make much sense to hold onto this property.

After giving the property a quick patch up (some new tiling in the bathroom and gyprock in the entrance hall ceiling to fix where the plumber made inspection holes to look for a leaking pipe) we'll put this property up for sale. After paying some capital gains tax and paying off the remaining mortgage on this property, the remaining equity should be sufficient to pay off a large part of the mortgage balance on our own home. We can then afford to make principal and interest payments to pay off our remaining home loan balance before I reach retirement age, as well as have some spare cashflow to either invest in shares (or pay off some of my margin loan balance) or contribute into my superannuation account.

Looks like the JCU Centre for Astronomy (where I'm doing my Masters by distance education) is going to be closed down by the uni. Hopefully it won't affect the final subject of the MAstron that I'm already enrolled in for the second half of 2012. But it will mean I can't continue on to the part-time Doctorate or PhD by distance education that I was planning to start next year at James Cook Uni.

Once I get my result for the subject I completed last week, I'll start shopping around for local alternatives (and potential supervisors). Three of the local unis offer postgrad research degrees in astrophysics (either a MPhil, MRes or PhD), but I'm not sure if they are available part-time (or my chances of getting my application accepted). On the plus side, I wouldn't have to fly up to Townsville three times a year to see my supervisor if I enrol in a local uni part-time.

Subscribe to Enough Wealth. Copyright 2006-2012
Posted by enoughwealth@yahoo.com at Wednesday, June 13, 2012 No comments: Links to this post