The Credit Suisse Research Institute brought out their second annual 'Global Wealth Report' last month (link to free pdf here). It makes interesting reading, although its a bit depressing as it shows that my personal wealth accumulation has been badly underperforming both global and Australian benchmarks since the GFC. That can probably be accounted for by comparing my distribution of financial and real assets and debt load compared with the national average, as shown below: 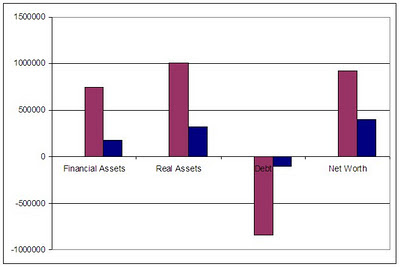 This shows that although my financial:real asset ratio is similar to the national average for Australian adults (I hold about 4x the average amount of financial assets and 3x the average amount of real assets ie. property), I have much higher debt levels - 8x the national average (via property mortgages and using leverage for my financial asset investments). Overall, my net worth is 2.3x the average for Australian adults, but that is rather disappointing given my age, qualifications, and even my salary. With such high levels of gearing, my wealth accumulation strategy relies on a return to long-term trend rates of asset appreciation sooner rather than later. Otherwise, the servicing costs on carrying a large amount of debt at a time when asset prices remain flat will mean my wealth continues to stagnate until I'm eventually forced to reduce my gearing levels as I approach retirement.

ps. I haven't updated my net worth figures for the past two months - partly because I was busy doing our tax returns and a back-log of uni assignments, but also because falling Sydney property prices and a declining stock market meant that the results were bound to be disappointing. I'll probably get the figures up to date next week, once my uni exam is out of the way.

Posted by enoughwealth@yahoo.com at Friday, November 04, 2011 3 comments: Links to this post