The Bell at the Top of the Stock Market


Amongst the many old adages relating to the stock market is the one saying "no one rings a bell at the top of the market". And like many such adages it is basically incorrect. The "bell" one should listen out for is when the market is out of line with its fundamental essence - the economy.

As a case study, I've pulled about 35 years of quarterly GDP index data for the Australian economy, normalised for 2010=1.00 (source: source:
https://research.stlouisfed.org/fred2/series/NAEXKP01AUQ661S# ) and calculated quarterly average 'All Ordinaries Index' (XAO) values from the adjusted daily close data (source: https://au.finance.yahoo.com/q/hp?s=%5EAORD&a=07&b=3&c=1984&d=08&e=28&f=2015&g=d ). I've then simply divided the quarterly average XAO index by the GDP index to get a simple measure of the valuation of the stock market compared to the national economy. 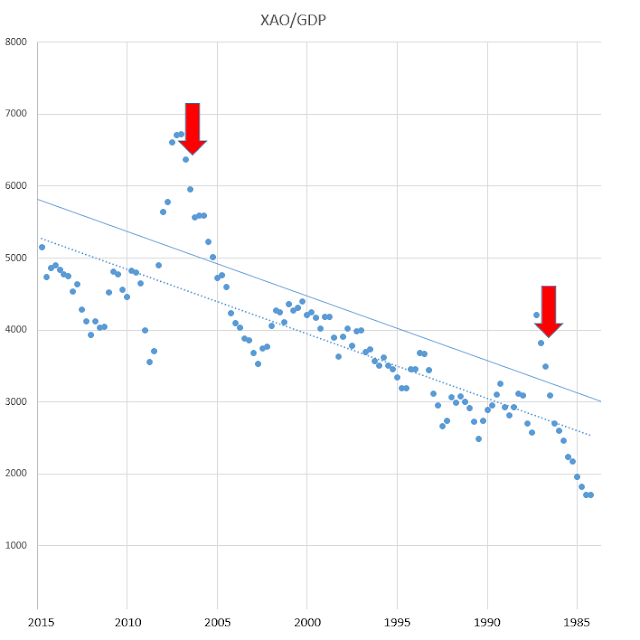 (nb. The unconventional x-axis is simply due to the way I had uploaded the data into my spreadsheet, resulting in the x-axis starting with the most recent quarterly data.)

From this simple plot one can clearly see the two 'once in a lifetime' instances of 'irrational exuberance' (aka 'the madness of crowds') that occurred in 1987 and again in 2007. If one had got out of the market during the two quarters prior to each 'crash' where this overvaluation became apparent from this sort of simple plot, one would have done very well. (In my case I hadn't started investing in stocks back in 1987 -- I was just doing 'paper trades' as part of a Business Economics course at university, and in 2007 I decided to 'insure' my geared stock portfolio using Index Put Options rather than liquidate my stock investments and crystalize a capital gains tax liability, and then failed to 'roll over' my put options.

The only difficulty with trying to take advantage of this clear signal is that when the market moves above the trend line it can do so for a considerable period, and by a substantial percentage, so while this plot will show when the market has moved into dangerous territory it can still be difficult to 'pull the trigger' and liquidate ones portfolio (or buy Put options) when the market appears to be in a strong up-trend. One strategy might be to sell off a fraction of the portfolio as soon as the market is clearly well above trend, and then sell off an additional fraction every month or two while the market continues to set new highs. Waiting for the market to peak and establish a clear down-trend is often impossible to implement due to the speed at which a market 'crash' can occur.

While it may be tempting to also try and time Index Fund purchases by waiting for the price to drop below the trend line, the market tends to dip below trend more frequently, but with less severity, than the relatively rare instances when the market moves substantially above the trend line. For that reason it is probably sufficient to simply dollar-cost-average into the market (from example via an automatic savings plan being setup to buy a fixed dollar amount of Index Fund units each month) as long as the market is around or below the trend line. If the market drops considerably below the trend line due to global events that may only have a transitory impact it might be an opportunity to make an additional 'lump sum' investment utilizing any 'spare' cash reserves, or by deciding to increase gearing (however, if one already employs gearing, there is often little scope to borrow more when the market suffers a large drop -- one is more likely to be concerned about the possibility of a margin call).

I booked coaching classes in Advanced English, '3 unit' Mathematics, Physics and Chemistry for DS1 next school term (10 weeks of 7-hours/week coaching cost around $800). Although he doesn't start these HSC 'Preliminary' subjects until Year 11 at the start of next year, the plan is that having some advanced exposure to the core syllabus content might help him do his best in these subjects at school next year. We'll see how it pans out. I'd previously bought him a set of Excel study guides for his HSC Preliminary subject selection, but he had hardly glanced at them this term (too busy doing school 'homework' at the last minute to ever actually 'study' - except the night before a class test), so leaving planning and execution of a study schedule to him seems a forlorn hope. Perhaps having scheduled weekend 'coaching' classes and set 'homework' will be more effective.

DS2 has actually been enjoying attending 'Year 4' coaching classes this year (he is in Year 3 at school), and he recently sat for a 'scholarship' exam run by North Shore coaching and did well enough to qualify for a 1/4 scholarship (fee rebate). Unfortunately that was only for entry and attendance in the Year 4 'Young Achiever' coaching classes next year, and when I went to enroll him last weekend I learned that very little of the 'High Achiever' course content differs from what he has already done this year in the Year 4 'Fastrain Extended' program. So instead I've enrolled him in the Year 5 'Fastrain Extended' course for next year, and he will have to sit another 'entry exam' to see if he switch into the Year 5 'High Achiever' course. After I complained a bit about not being told that the Year 4 'Young Achiever' course content would be almost identical to what he has already been doing this year (and hence a total waste of his time and my money), they at least agreed to waive the normal $30 exam fee. I've enrolled DS2 for the next four terms, as there is a small (10%) discount applied for multi-term enrollments of three of more terms. The cost for the four terms was around $2200! Still, I suppose it is a lot cheaper than private school fees, and will be money well spent if he gains entry into OC and then Selective High School. of course one can never be sure if the money spent on coaching has actually 'added value', or if the students might have done just as well without attending any coaching classes. I managed to get into 'OC' when I was in Primary School, but in those days there wasn't the 'coaching industry' that exists today. In some ways coaching is a bit of an 'arms race' - parents whose kids might struggle to get into OC or Selective HS send them to coaching to get the extra few marks that might get them in, which in turn means that parents of 'bright' kids are worried that their kids might 'miss out' of the chance to attend if they don't go to coaching also...

At a minimum coaching should help improve exam technique and reduce exam nerves/stress in the actual selection exams, and provide some help in any subject areas that need improvement. Whether it does any good in areas where a child is already performing well is much less certain. And there is a view held by some academics that the nature of coaching classes might make them counter-productive for more gifted pupils (who might find the 'workbooks' favoured by coaching school to be repetitive and boring). As with most things it is up to the parent to decide whether or not coaching may/will be beneficial and if the expense is justified.

A negative month for my net worth, with global share markets taking a battering as the reality of the slow-down in the Chinese economy hit their stock market and then the rest of the world followed suit. This devalued my geared stock portfolio and retired savings considerably, although the overall impact was slightly mitigated by the continued rise in the estimated valuation of our Sydney real estate. The local council is still deciding on the rezoning of the area surrounding the new hospital site (which includes our home), so for the moment I'm continuing to use an estimated valuation based on the average sales data for the entire suburb.

The overall monthly decline in my net worth was -$57,738. Not a particularly cheerful amount considering it is about the same as my annual after-tax 'tax home' pay! So far 2015 has seen very little change in my net worth, although the monthly fluctuations have been 'interesting' to say the least. 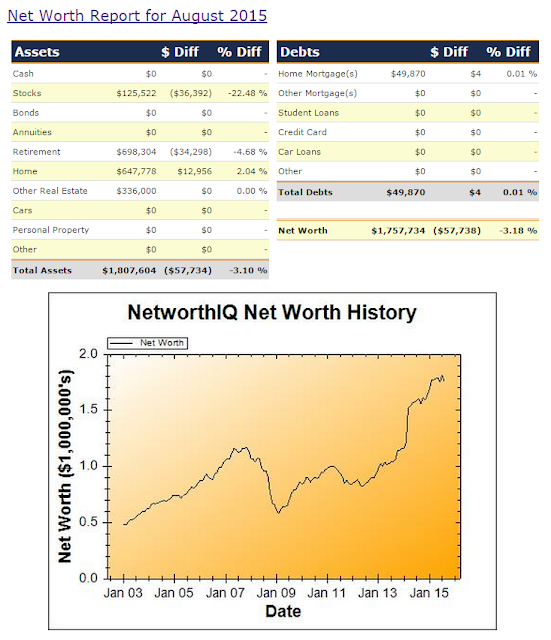