We finally decided to go ahead and trade in our 10-year-old Ford Festiva for a new 4WD/AWD SUV (A Ford Escape ZD). With the kids now 4 and 10 the Festiva was getting a bit cramped, and I was getting tired of driving a manual car for an hour and a half in peak hour traffic every day. This model is usually priced around $34,000 but at the moment is on 'sale' for $27,990 "drive away" so it's about the same price as the base model Hyundai ix35 (which we were also considering), and a fair bit cheaper than a Subaru Forester (which is what I'd buy if money was no object).

We got a $1,500 trade in valuation on the Festiva (which has only done 123,000 km but is ten years old), and after asking for their "best price" arrived at a final price of $26,300 with some car mats and a bike rack thrown in as sweeteners. Some other Ford dealers were advertising a slightly lower sticker price, but we may not have got as much for the trade in or the "free" accessories, so I decided not to spend the whole weekend visiting multiple dealers to try and knock down the price a bit further.

DW wanted a light colour (for visibility/safety) so black and 'royal ego' (metallic black/dark grey) were ruled out, and I was sick of red cars after driving a red Ford Capri and then a red Ford Festiva for the past twenty or so years. We both aren't keen on white cars, so that left a choice of either 'moonlight' silver or 'metallic sand' (a light-tan shade of silver). I decided on the 'metallic sand' as it may not look as dirty after every Sydney rain storm (I don't often wash my car, and begrudge spending money on a car wash - although that may change for the first couple of years with this new car). 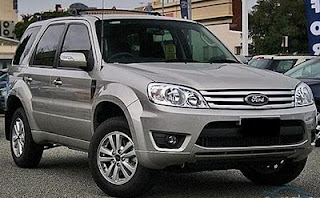 I paid the $500 deposit using my credit card and will drop off a personal cheque for the balance tomorrow. The registration and other paperwork and 'preparation' will be done during the week (while my cheque clears) so we should be able to drop off the trade-in and drive away the new car next weekend. Meanwhile I need to reorganise the 'stuff' stored in our garage, and install the roller-door motor kit I bought last week ($275). I'll probably take out comprehensive car insurance on the new car (at least for the first few years), before reverting to theft and fire insurance, and eventually only keeping third party property damage (and the compulsory third party insurance) when the car has depreciated to under $10,000 valuation.

I expect to keep this car for at least ten years, so the annual cost is about $2,630 depreciation plus ~$500 for registration/CTP insurance, ~$1,000 or so for regular servicing, ~$200 each year accrued for new tyres, and $500 for comprehensive car insurance (not too expensive since DW and myself are both over 40). All up around $5,000 pa. Petrol costs should be similar to our current, smaller car (at around $35 each week), as although the Escape is larger and heavier than the Festiva, the newer engine technology means the Escape has similar fuel consumption figures (around 10L per 100km). Aside from the daily commute to and from work and the normal weekend family activities, we will be using this car for trips to my parents farm at Wallis Lake (about 350 km north of Sydney) every couple of months during the school holidays. There are lots of scenic 4WD tracks there, so we may even lock the car in '4WD mode' occasionally ;) 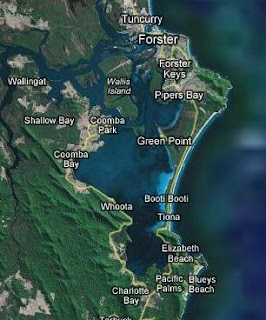 I'm not sure how often we will use the bike rack, but the roof racks should be used quite often to transport my wind-surfer and kayak when we visit the Lake. The large boot and rear 12V power point will also be useful if I take my 10" Meade SCT on field trips ;)

ps. I'd previously blogged about second-hand cars being much better value than buying new vehicles, but at the current sale price the new Escape is only a few thousand more than a 2-3 year old second-hand Escape.

Last time I checked, buying textbooks online from Amazon.com and paying for shipping to Australia was about 1/3 cheaper than buying the same textbooks "locally" from the Uni Co-op bookshop (even after the ~10% "member" discount). So, while the Aussie dollar is at parity with the greenback I decided to order all the remaining textbooks and recommended reference books for the rest of my MAstron course. Below is a comparison of what I'm paying for these books from Amazon.com and what the Co-op bookshop would charge:

If you add another $100 or so for the textbook that isn't even available from the Uni co-op, the total cost buying locally is around $865, which is 53% more than it cost using Amazon.com.

Most of the textbooks I could find searching the Uni Co-op website were also listed as "out of stock" - which most likely means that the Uni Co-op bookshop simply orders these items from Amazon.com themselves!

Subscribe to Enough Wealth. Copyright 2006-2010
Posted by enoughwealth@yahoo.com at Saturday, November 13, 2010 No comments: Links to this post

Email ThisBlogThis!Share to TwitterShare to FacebookShare to Pinterest
Labels: Master of Astronomy, textbooks

I finally managed to complete my last prac assignment for 'Astronomical Instrumentation' during my lunch hour and email it to JCU. When I checked my email again after work the lecturer had already marked and returned it! As I had expected, there was LOTS of "constructive criticism" feedback scattered throughout - so I was pleasantly surprised to still manage to score 8/10. Overall I averaged around 90% on the tutorial and prac assignments, so I might manage to scrape together an HD if I did OK on the final (and if everyone else hasn't scored even better!).

Nothing to do now but wait for the result to come out on 6 December.

Since the Aussie dollar is currently worth a bit more than the USD, I may order all the text books and recommended references for next years subjects. If they arrive from Amazon.com before Christmas I'll have something read during the 10-hour train ride to visit my parents up at Inverell ;)

Subscribe to Enough Wealth. Copyright 2006-2010
Posted by enoughwealth@yahoo.com at Tuesday, November 09, 2010 No comments: Links to this post

Email ThisBlogThis!Share to TwitterShare to FacebookShare to Pinterest
Labels: Master of Astronomy

Well, I just spent the past 24 hours doing the "open book" final exam for this terms Master of Astronomy subject, 'Astronomical Instrumentation'. I actually got about five hours sleep and slacked off (aka as lunch, dinner and a shower) for several hours, so all in all I "only" took 15 hours to complete the ten multi-part questions! I emailed my answers to the lecturer 30 minutes before the deadline - just in case there were any last minute Internet connection hiccups (our router and cable modem have been playing up recently). The questions in the exam paper were all fine - everything had been covered in the lecture notes or the textbook - but there were just too many of them. It took forever to check I was using the correct formulae, calculate the result, find reference material and image data on the web, double check my result etc. etc.

I had thought the exam paper last term was overly long (it took around 12 hours of effort to complete the ten questions), but this paper was even worse because the last question was worth 40 marks (the other nine questions were only ten marks each), and was basically a repeat of the last practical assignment - which unfortunately I hadn't finished yet (I was sick for a month in the middle part of this term and fell behind. Fortunately the lecturer had granted me extensions on the due dates, but I'm still finishing off the last prac assignment!). So for the final question I was working out how to do the question as well as researching the data and writing up my answer...

Ah well, as soon as I finish of the last prac tonight (or tomorrow) I'll be able to "relax" and start working on last year's tax returns for DW, myself and the kids. It will be interesting to see what grade I wind up getting for 'Astronomical Instrumentation' - I really need to get an HD to have any chance of getting a university medal for my MoA coarse (I got a D last term in 'Modern Astrophysics', and you have to get a GPA of 6.5 or better to be considered for a university medal. Basically that means getting Distinctions for 3 of the subjects, and getting High Distinctions for the other 3 subjects. And it may be difficult to get HDs for the final two subjects - the literature review and research project - as it will depend a bit on what research topic I am assigned).

Subscribe to Enough Wealth. Copyright 2006-2010
Posted by enoughwealth@yahoo.com at Sunday, November 07, 2010 No comments: Links to this post