Overall my estimated net worth at the end of May had increased slightly (+$5,284) from the previous month to reach a record high of $1,790,460 AUD. Positive contributions came from the increased valuation of our home (but that estimate is based on 12-months average sales figures for our suburb, with the latest figures being for the period ending March 2015. The more current RP Data index for all-Sydney suggests there was a slight drop in average house price during May, which might indicate the current boom/bubble in Sydney real estate is coming to an end), and from a rise in the value of my superannuation account balance (due to a drop in the Australian dollar increasing the unit value of our Vanguard LifeStategy HighGrowth Index Fund investment). These gains were largely offset by a drop in the net value of my geared stock portfolio, which was affected by both a decrease in the stock market during May, and also by a slight draw down on my portfolio loan to repay a $20,000 'balance transfer' I'd taken advantage of (to access some funds at 0% interest rate for six months).

Our 3-year fixed rate home loan reverts to standard variable rate next week, at which time I will pay off $55,000 of the home loan balance (which is not tax deductible in Australia) using some realized gains on one of my hedge fund (OMIP220) investments that is maturing in June and being paid out. That will reduce the market value of my stock investment portfolio by the same amount, so there will be no net effect on my overall net worth (but theoretically reduces my gearing slightly).

During the remainder of 2015 I should be able to start working on the development application for building an extension to the lake house (on my hobby farm), but I will be capitalising those costs (as the cost of the extension should add an equivalent amount to the value of the hobby farm) they will also have no net effect on my overall net worth. But it will mean that a larger percentage of my net worth is tied up in illiquid investments (especially so in the case of my hobby farm, as I expect to pass it on to my sons as part of my 'estate' -- fortunately Australia does not have gift, death or inheritance taxes, so they will only pay capital gains tax if they eventually sell the property for more than the 'cost base' value. Due to the fact that the 'cost base' is no longer adjusted for inflation, long term capital gains are taxed at half the marginal tax rate, which approximates to only paying tax on 'real' gains -- at least up to the point where an asset has more than doubled in value during the holding period).

Once we have paid off a large chunk of our remaining home loan I should have some spare cash flow each month, which I'll use to pay off some of my margin loan balances. With the margin loan interest rate currently around 6.29% and my marginal tax rate for 2015/16 being 32.5c or 33c (depending on whether or not the “Clean Energy” (carbon tax) package of compensation measures gets rescinded as planned), this will give me an effective return of around 4.2% for paying down that tax-deductible debt rather than saving the extra cashflow. Conventional wisdom would indicate the optimum use of the extra cashflow would be to pay off any non-deductible debt (eg. credit card balances or my home loan), but I don't have any credit card balance (I pay off the amount due in full each month) and paying off our home loan would require DW to pay the same amount (as our home and loan are in joint names and we make equal loan repayments), and she has just bought an investment home unit 'off-the-plan' and wishes to save up some funds to be ready to pay settlement costs and stamp duty when the construction is completed towards the end of 2016.

It will be interesting to see when (if) my net worth eventually hits the "two million dollars" mark. Although I am saving about $30,000 of my salary into superannuation each year, the biggest factors affecting my net worth will continue to be changes in the value of our home (especially if our property is rezoned to 'medium density' in August), and how the Australian economy and the stock market perform (affecting my superannuation savings). 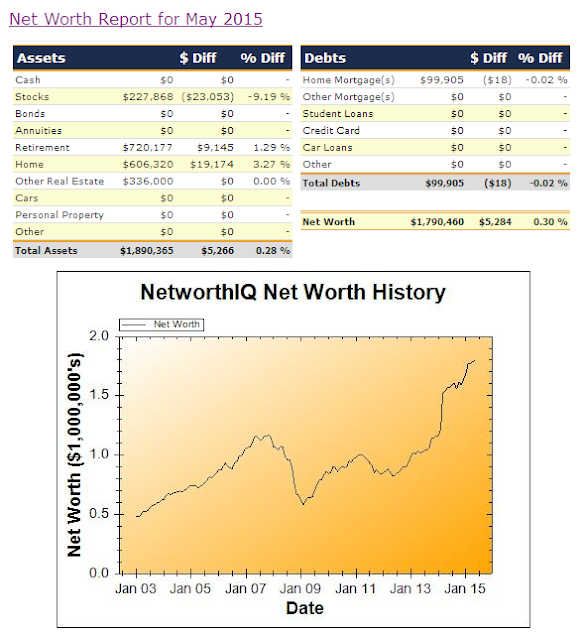