A fairly good week. Despite getting a sore throat on Thursday (which developed into a cold/cough over the weekend) I managed to exceed my 12,000 daily step goal every day but one, and overall my average daily step count was a record high (mostly due to spending all Sunday walking around town with the family as we visited three museums on their annual 'free entry' day - I clocked up just over 20,000 steps that day!). My average daily calorie intake was also OK, largely due to attempting a five-day 'fasting mimicking diet' stint on Wed-Sun. Aside from it being my own gluten-free and modified version of Dr Longo's proprietary FMD 'ProLon' diet (I only try to match the overall carbo/fat/protein/calorie values, not his weird Kale cracker and vegetable soup meal plan), and also not sticking to my diet plan on Friday and Saturday (I had some extra chocolate on those days, as I was finding it hard to stick to the FMD while suffering from a bad cold), the three days of FMD diet helped lower my average cals for the week. By being on the FMD for three days during the week, I suppose the overall effect was a bit like being on Dr Mosley's "5:2" diet.

This week I'll try to stick to my normal healthy eating plan (it's not really a traditional weight-loss "diet" as such, simply what I *should* normally be eating for a healthy CRON-style lifestyle - but due to being overweight and doing lots of walking, it does result in gradual weight loss and improved fitness). I'll also try to do my 5BX exercises every day - last week I managed to do it four times during the week, so it is slowly starting to become part of my daily routine. (Being at level A- on the first page of exercises it is rather easy to do - but it is already improving my core strength (the number of situps/pushups I can manage) and my aerobic fitness (although I am still not very fit)).

Next week I have to drop my car in to the smash repairer on Monday to fix a dinged front bumper bar and broken headlight, so a lot of my daily walking will happen naturally going to work by bus and/or train. I also have to go into hospital on Wednesday for an endoscopy to confirm my Coeliac diagnosis, so I'll have nothing to eat on Wednesday until the evening, and the 'preparation' for the endoscopy will also involve not eating much on Tuesday evening. While the surgery (and 'Picoprep' beforehand) won't be fun, at least it should provide a boost to my weight loss for the week ;)

Overall things are going pretty much according to 'plan' - I should be in good enough shape to enjoy a few days skiing with the family in late July, and then doing (walking) the 14km 'City2Surf' "fun run" with my boys on 14 August. In spring I'll take my kayak out for a few weekend trips, and we'll probably going for a few family hikes in the nearby national parks. I started cleaning our swimming pool last weekend, but it usually isn't warm enough for me to start swimming laps until October/November.

The week was going very well until Friday - sticking to my diet plan, exceeding my daily step count goal, and even doing my 5BX session every evening. Then over the weekend things sort of fell apart. It was rainy weather, so I found it difficult to reach my walking goal, and I also slacked off and ate some confectionery on both Saturday and Sunday evening. I've noticed that it tends to be easier to stick to my diet plan during the weekdays, and then I often overeat during the weekends - either having a large lunch as well as my normal dinner, or snacking during the weekend. I'll have to make sure I stick to my diet plan this week, and pay extra attention to my diet next weekend. Fortunately the occasional 'bad' day won't derail my long term weight loss and fitness program, provided that I make sure I get 'back on track' straight away. Over the years there have been many times when I either loss motivation and simply cease monitoring my diet and stop exercising, or else the occasional 'bad' day keeps recurring and it soon becomes a fortnight or month of 'slacking off' and the weight has started creeping up again. Checking my weight every morning, planning my daily food plan on a slip of paper in the morning, and then writing down any changes during the day helps keep me 'honest'.

A good week overall. I overate slightly on Friday and Saturday, but stuck to my diet plan for the rest of the week. I also managed to exceed my target 12,000 steps every day, and got over 15,000 steps doen on three days last week - resulting in a record high daily average step count. I also did my '5BX' exercise session twice last week, and the usual weekly hour of hitting a ball around the squash court with my sons on Sunday. My blood pressure readings have been well below 120/80 for the past couple of months, so when I saw the my GP on Saturday we agreed I could halve my daily doe of blood pressure medication. Hopefully by the time I'm down to my 'ideal' weight (~70-75 kg) my blood pressure might be normal without needing to take medication. The weight loss and exercise should also lower my cholesterol, triglyceride and LDL levels, although I'd have to do sessions of vigorous exercise several times a week to see much increase in HDL ('good' cholesterol) levels.

My parents visited us during the long weeked, and we all went for a walk on Monday afternoon. My 81 year old mother has a heart condition, but managed to stroll along with me for an hour (~7,000 steps), but my 84 year old father decided to take a break along the way, and we met him again on our back home. They should go for a gentle daily walk to keep in shape - my great-great-Aunt recently celebrated her 100th birthday, and still goes for a daily walk to her local shops.

A mixed week. My average caloric intake was improved by my new 'gluten free' dietary requirements precluding most of the confectionery I used to have trouble avoiding, so I only ate slightly more than my diet plan on two days during the past week. However my average daily step count was slightly below target due to torrential rain over the weekend, which limited my walking to doing 'laps' of the local shopping mall. On Sunday afternoon I had a flat tyre and spent and a couple of hours in the rain (trying to change to flat, and then waiting for the NRMA to come and do it for me when I got stuck with the flat off and the spare not fitting on because I had the jack in the wrong spot!) rather than going to play squash. Ah well, at least I got some exercise jacking up the car and manhandling the flat and spare tyres! I also didn't do any 5BX sessions, so my goal this week is to hit my target step count every day, and to start doing my daily 5BX sessions.

This of course is a very subjective question, but one measure of my "richness" that I choose to track is my net worth estimate at the end of each year versus the cut-off net worth required to get onto the Australian 'Rich 200' list. The "BRW rich list" was started by the now-defunct magazine 'Business Review Weekly', but is still published every May (currently by the Australian Financial Review).

I am, of course, no where near wealthy enough to make the "rich list", but I aim to eventually achieve a net worth of 1% of the cut-off figure. When I started tracking this at the start of this century I was initially making good progress every year, and was even thinking about the possibility of  'early retirement' at age 57. Then the GFC struck, and my net worth not only plummeted in absolute terms, it also did very poorly compared to the "rich 200", who are predominantly invested in property, whereas I had a large (geared) exposure to the stock market (and failed to 'roll-over' my index 'put' options at the end of 2007. D'Oh!). And then the EFC put an end to the post-GFC 'bounce' in my stock portfolio, and then it suffered a bit more as the 'mining boom' came to and end...

But at least for the last couple of years it seems to be improving once more versus the "rich 200" cut-off (which currently it stands at 303 million A$).

On a positive note, the 'net worth' figures I use in this spreadsheet doesn't include the value of the rural property I pre-inherited at the start of 2015. But it will, eventually, reflect any windfall profit we make when (if) our home gets bought by a developer (which could potentially boost my net worth by around 0.25% of the "rich 200" cut-off amount).

Anyhow, with a personal net worth well below 1% of the net worth of the poorest of the "rich 200" Australians, I feel somewhat justified in feeling "comfortably off" rather than "rich"... 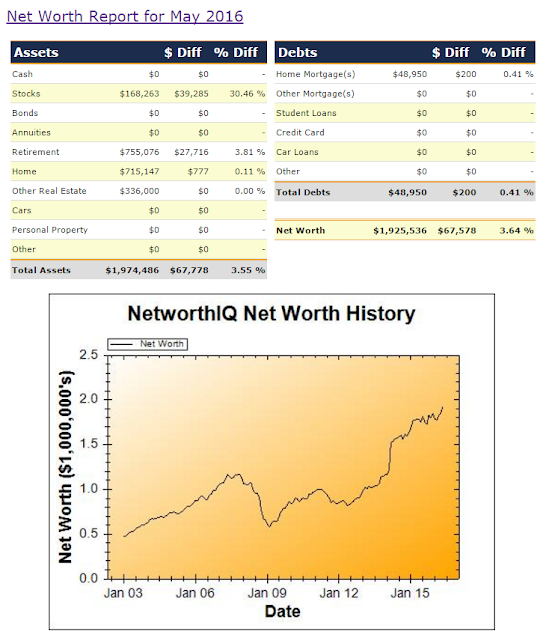 Subscribe to Enough Wealth. Copyright 2006-2016
Posted by enoughwealth@yahoo.com at Wednesday, June 01, 2016 No comments: