Quick, Sell (Lease) the 'poles and wires' before they're not worth anything!

The latest opinion polls suggest that the NSW election is likely to see the coalition remain in government for another term. Theoretically that should mean that their policy to 'sell' (actually a 99-year lease of 49%) the electricity system 'poles and wires' should go ahead, with most of the proceeds going to build other much-needed public assets (ie. infrastructure). Of course, with the minor parties still having enough senators to block any government legislation that Labor is opposed to, just winning another state election isn't a guarantee that this policy will ever get implemented. But it should - if for no other reason that if they wait too long the 'poles and wires' are likely to be entirely worthless within a few decades.

Just as the sale proceeds from selling the electricity generation assets (coal-fired power stations) were eventually much less when the sale went through a decade or so after it was first proposed (due to the move towards alternative electricity generation sources to address the need to reduce greenhouse gas emissions), the value of the existing 'poles and wires' used for distributing bulk generated electricity is likely to plummet when rooftop solar power generation starts to eliminate the need for many houses to remain connected to 'the grid'. Already a house could be self-sufficient in electricity generation if the entire rooftop was covered with standard PV panels (and expensive storage batteries), but developments in PV technology mean that within a decade or so the required set of 20 or so large panels could be replaced by a single panel around 1 square meter in size, and at much lower cost. It would only need improvements in the cost of batteries (or the development of alternative energy storage systems like hydrogen fuel cells, room temperature superconducting magnets etc.) to make it affordable for most houses to be self-sufficient in terms of energy. How much will the old 'poles and wires' be worth then?

A significant rise in the Australian Stock market over the past month gave a major boost to my net worth via increases in the valuation of my geared stock portfolio (gearing is fun when the market is rising -- not so much during the GFC) and also a rise in my superannuation account balance. Our house price estimate also managed another slight increase. Overall my net worth hit a new high of over A$1.75 million. 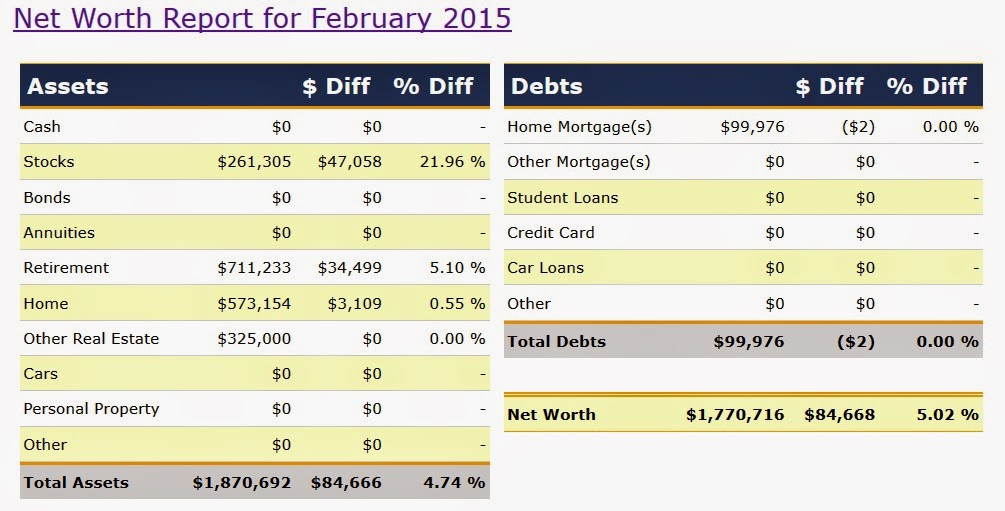