On 19 Feb we suddenly found ourselves without any hot water (we have an electric 265L hot water tank that is heated "off peak" in the early hours each morning), so we had to call in a plumber to make repairs. I still thought of the tank as being fairly "new", as when we bought our house in 2003 it was only just out of the 5 year warranty period. The plumber replaced the heating element and thermostat ($85 each) and the repair bill was $300. At the time we decided not to buy a new water heater as the new tank would have been larger and would have cost extra for relocation, and I hadn't had a chance to compare models and costs. With a bit of luck the old tank might have lasted several more years.

Of course a week after the tank had been repaired the cover lifted off the base and expanded insulation started to poke out of the bottom - not a good sign as it often means that a leak has developed. Sure enough, this morning DW phoned me to say that the old tank had ruptured as was spraying out hot water. We decided on getting a slightly smaller tank (250L) that was able to fit in the same position as the old tank. The plumber also recommended replacing the old pressure relief and 'Dua' valve at the same time, so the total cost for the new water heater was $1363.50

The tank has a 5 year warranty, which means it will probably last 7-10 years before it has to be replaced. By that time off-peak electricity will probably have been phased out, so we'll be looking at either a heat pump or solar hot water system next time.

Well, all four neon tetras we had bought had died after the first two days. I've never had much luck with keeping neon tetras, so next month I'll just add one ramirezi dwarf cichlid and possibly one kuhli loach, rather than replacing the neon tetras. The siamese fighting fish appears to be thriving, as does the pearl gourami. I might buy a second pearl gourami when the tank is well established. The bristlenose catfish is also fine, although I've only seen him twice in the past week.

I was originally intending to buy some glass (ghost) catfish, but they don't fare well is less than ideal water conditions, so it's probably not worth the risk. I was also considering adding a few male guppies, but as I've previously had problems with them nipping the colourful tails of other fish (such as siamese ff), I think I'll also give them a miss.

I did a fish count when I turned on the tank light after getting home from work and found one dead neon tetra and only two live ones. I can't find the fourth neon tetra, so I assume the body is wedged someone amongst the bogwood, plants and gravel. The Siamese fighting fish looks happy enough, and after searching for a while I spotted the pearl gourami dozing in a cavern under the bogwood. He eventually woke up with the light turned on, and was eating flake food with gusty, so he/she also seems OK for the moment. The tiny bristlenose pleco can't be seen, but I only spotted him by luck yesterday when the tank was clearer, so he's probably just hiding underneath some of the bogwood.

The filter outlets weren't flowing when I got home, so I removed the extra activated charcoal I'd put into the filter tray as I suspect the white filter wool pressing against the drip tube holes had made them clog up sooner than normal. I also did a 10% water change, and will change another 10% every day for the first week until the tank 'cycles' and starts to clear.

Subscribe to Enough Wealth. Copyright 2006-2011
Posted by enoughwealth@yahoo.com at Monday, February 14, 2011 No comments:

Due to various family members suffering from allergies, asthma and/or eczema, our household has been pretty much a pet-free zone up to now. We previously had a couple of attempts at keeping a Siamese fighting fish in a small bowl, but it was a short-lived (ahem) experiment both times. However, as I had successfully kept (and bred) tropical fish as a youngster myself, I still wanted to set up a small aquarium so DS1 could learn a bit of aquatic chemistry and have a bit of responsibility for the care and maintenance of a "pet".

I'd bought a small (32L) tank at Aldi a year ago, and finally got around to setting it up in our remodelled lounge room/library this weekend. The tank came with a power-head filter and light built in to the cover, as well as a bag of gravel, a net, some plastic plants and a 'decorative' fake rock. As I still had some nice bog wood pieces and wood tank stand in storage, I only had to buy a 55W heater, an air pump and air "wand" to be able to setup the aquarium.

I filled the tank and added water ager yesterday, and the pH and temperature were OK today (although the tannin from the bog wood had made the aquarium water an interesting tea-colour. I've since added some extra activated charcoal to the filter tray). So I ignored my own good advice (to let the tank "settle in" for a week before adding some plants, and two weeks before adding any fish) and went out and bought some fish today:

That could easily end up being $41.74 flushed down the toilet (literally), but if these fish do survive the next couple of weeks it will at least mean that less risk of introducing diseases to the tank each time I add additional fish to the established aquarium. Not that this size tank can take much more livestock - even with the 90cm long air wand putting out an impressive blanket of air bubbles, I can only reasonably plan on adding a couple of glow-light tetras and one ramirez dwarf cichlid later on.

We'll find out over the next few weeks how this "experiment" turns out.

ps. I called the blood-red Siamese fighting fish "Valentino" and told DW that since tomorrow is the 14th it can be her Valentine's Day present. She wasn't overly impressed ;)

Subscribe to Enough Wealth. Copyright 2006-2008
Posted by enoughwealth@yahoo.com at Monday, February 14, 2011 No comments:

I've never been a supporter of capital punishment, mostly because the legal system does occasionally get it wrong (and while you can pay compensation to someone who has been incorrectly incarcerated for years, the state can't "make things right" when it turns out they executed the wrong person), but also because I can't see that the principal of national "self defence" that could be used to justify the state killing people in acts of war can really be extended to executing convicted criminals rather than just incarcerating them for life in order to protect society.

But I had thought that execution was obviously cheaper than maintaining a prisoner in jail for the rest of their natural life. Apparently that isn't the case though - according to an article in today's SMH, it costs around $3 million per execution, while life imprisonment "only" costs around $1m. It seems sad that some US states may move to eliminate the death penalty for fiscal reasons, when instances of the wrong person getting executed for a crime had failed to see the practice banned.

For the past few months I haven't been tracking my investment account balances daily, but since I have a day off work today and the Aussie share market has been doing well for the past couple of weeks I decided to look up the current figures. According to my "net worth" spreadsheet the bottom line using yesterday's close of business figures was $1.006 million. 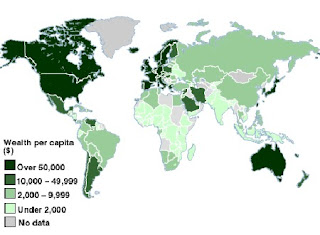 Last time my net worth was over AUD$1m was back in 2007. This time around it's also US$1m due to the strong Aussie dollar, so I suppose in that sense I'm even more of a 'millionaire' than last time around. But, given the massive hit my net worth took 'during the GFC' (putting it in the past tense seems to be tempting fate), it doesn't feel "real" this time around. Of course, with inflation and what-not, being a "millionaire" isn't quite the same thing as it was in the era of The Great Gatsby.

Depending on how the market goes for the rest of February, I might still be a millionaire in my 'official' end of months figures and have it appear in my NetWorthIQ graph ;)

There's still a long way to go to get back to my peak net worth, even further to go in "real" terms (adjusting for inflation), and I doubt I'll ever be quite as well off as I was back in '07, given how much closer to retirement age I am now. Then again, there's always the $20m lotto draw coming up on Saturday...