Will Rudd drink from the poison chalice?

After a brief period of improving polls, the latest polling shows that the minority Labor government is losing ground to the opposition again, so at the moment it appears that the Sep 14 election result is again heading towards a landslide loss for the incumbent party. Since the announcement of the election date Prime Minister Gillard's approval has dropped sufficiently for opposition leader Tony Abbott to now be the preferred PM. This has reignited speculation that Kevin Rudd might be drafted back into the Labor leadership (having been previously dumped as PM in his first term after winning goverment for Labor) as the only way to avoid Labor being reduced to a rump party after the next federal election.

However, I think Kevin Rudd is way too smart to accept the Labor leadership again before the next election. Although as Labor leader he could probably bolster the Labor vote in Queensland, and help reduce the overall size of Labor's defeat at the next election, it seems unlikely that he could single-handedly win an election that was going to be lost by Gillard (and if things improve enough for Labor before Sep 14 for him to actually win, then Julia could probably also lead the party to victory). After all, a lot of Labor's unpopularity is due to party policies that would be hard to change simply by changing leader, and a change of leadership would do nothing to insulate Labor from the odium of the several corruption investigations/court cases currently underway in relation to several Labor politicians.

It seems more likely that Rudd will keep his powder dry until after the next election, and then aim to become leader of the Labor party if and when Gillard resigns after losing the next election. He would then have sufficient time to rebuild party support before trying to win back government at the following election (Kevin17?). It will be interesting to see how the polls track for the next six months until election eve...

While I have a sizeable investment in stocks, my total investment in the stock market (both directly via individual stock holdings and mutual or index funds, and via our SMSF investments) is only about the same value as our investment in Sydney real estate. So it was a bit of a surprise to see such a high correlation between my net worth and the local stock market. As a rule-of-thumb my net worth appears to go up or down by $200 for every 1-point movement in the ASX200.

I suspect the explanation is that the value of my real estate investments has been following a gentle up-trend (with the occasional mild dip of 5-10%), which has only been sufficient to offset the drop in value of my overseas stock investments in $A terms caused by the rise in the value of the Aussie dollar during this period, and the exaggeration of the market decline I experienced due to increasing my gearing levels during 2007 (which I failed to hedge when my index put-options expired in Dec 2007).

The chart also suggests that, despite saving about 1/3 of my gross salary income (mostly via superannuation 'salary sacrifice'), my future wealth is largely dependent on the vagaries of the stock market.

The recent bullish behaviour of the local stock market might indicate that there is some prospect that the ASX200 could regain the heady levels of late 2007 sooner than most pundits predict. Given that the Australian economy is more closely linked to the booming Asian region that either the US or Eurozone economies, and we are supposedly still in a 'golden age' of high commodity prices, the adverse impact of the high $A on Australian manufacturers may have run its course.

The long-term view also shows that although the Australian stock market was expensive in 2007 (which explains why the Australian market hasn't got back to 2007 levels yet, while the Dow Jones has), it was nothing like the 'bubble' of 1987.

Subscribe to Enough Wealth. Copyright 2006-2013
Posted by enoughwealth@yahoo.com at Tuesday, February 05, 2013 No comments: Links to this post

January again saw substantial increases in the values of both our real estate and stock market investments (hence there was also a rise in the value of our retirement savings/SMSF trust).

It looks as if the stock market pundits 'predictions' that the ASX200 may hit 5,000 by the end of 2013 may be fulfilled sooner rather than later, and another good month could see my NW exceed A$1m again sooner than I had thought possible. Of course that may prove short-lived yet again... just as things appear to be settling down in the Eurozone and continue to stumble along in the US, tensions in the China sea (and China's military growth as an up-and-coming superpower) are giving global investors something else to worry about.

While the boys were out of the house (staying with my parents during the summer holidays) DW and I have did our 'spring clean' and rearranged a whole lot of furniture. I moved my old raw pine bookcase into DS1's bedroom (now that he's in high school he does homework in his room and needs a bookcase there), and I decided to buy a new, slightly larger bookcase for my 'home office'.

After wasting time looking through several furniture stores (that didn't sell any bookcases for less than $400), we finally found the Ecco bookcase shown below in a discount furniture store. It was reasonably priced at $99, and looks quite stylish for the price, and the chrome matches the legs of my telescope tripod sitting in the corner of my home office. However, as I wanted a bookcase about 1.2m wide, and the ecco is only 800mm wide, I decided to buy two of them. The flat packs went together very easily, although it took quite a while to assemble them due to the complicate arrangement of poles and panels used for the sides of the bookcase. 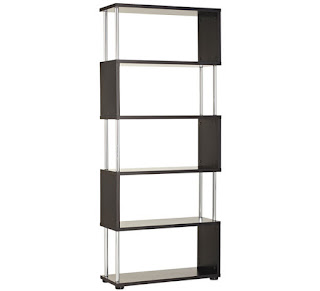 I also recently spent another $198 buying a couple of 'bin covers' (shown below) from our local hardware chain store. While I think bin covers are a stupid idea (why bother to try hiding rubbish bins away, when they have to be put out for collection every week anyhow?),  I bought these two 'bin covers' as the basis for constructing a 'roll-off' (or possibly 'tilt-off') roof for the small observatory I plan to build on my parent's hobby farm. These covers should be just large enough to accomodate my 10" Meade LX10 in 'stowed' position, if I install the telescope on a permanent-pier mount. I intend to automate the operation of the telescope as much as possible and run observation sessions from inside the farm house (or remotely from Sydney if I setup a local server), so the 'observatory' doesn't need to be very large at all, just protect the telescope for the elements and wildlife when not in use.

The bin covers were on clearance sale (normally the RRP is $199 each) as the manufacturer has discontinued this item. I decided to buy them even though I probably won't get around to building the 'observatory' for several years, as they are a lot cheaper than alternatives such as using a small garden shed. Since the telescope and accessories are 'worth' (i.e. cost) about $10,000, this is a small price to pay. 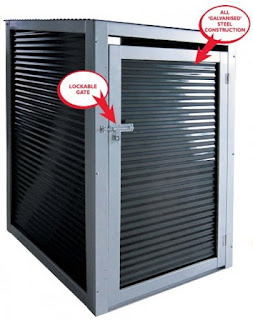 Of course none of this 'discetionary' spending had been allowed for when I put together my monthly budget for 2013, so it looks like January will already have a large 'variation'.

Subscribe to Enough Wealth. Copyright 2006-2013
Posted by enoughwealth@yahoo.com at Sunday, February 03, 2013 No comments: Links to this post