How much can a kid earn?

Well, aside from child actors - I mean how much can your normal, average kid earn? I've no idea really, but it's been interesting to see how much my son managed to earn doing a couple of casual jobs. DS1 earned about $80 a week doing a paper round for almost two years - he enjoyed the morning walks with his dad and stuffing the folded papers into the letter boxes. As it took 2 hours to deliver the papers, five days a week, this works out at $8 an hour for him - a pretty good hourly rate for a primary school kid. But, this isn't counting dad's time spent supervising and lifting newspaper bundles, or the cost of driving to and from the paper route.

More recently he'd started learning the recorder at school, and enjoyed performing at the school concerts, so I got him a busking licence from the city council. When he was in the city for his Saturday morning music lessons we'd take the opportunity to let him busk for a short while. At his age he gets lots of interest from the passing tourists, especially when he's wearing his medieval jester's cap. He has sometimes earned a surprising amount in a very short time - the exact amount depending mainly on the location chosen. In the main city park there was a lot of passing trade, but very few people stopped to listen. The average amount contributed was also small - around 10c-50c per person from this audience. The return was much higher outside the public art gallery - the pedestrian traffic flow was less, but the audience was more appreciative, included lots more tourists, and the amount contributed was typically higher - some contributions were $1 or more. 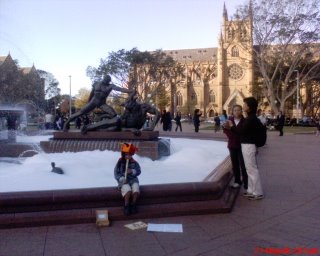 My son enjoyed busking for short periods - after 10 minutes he'd lose interest and need a break (a quick tour through the art gallery was always fun). Then, after a second 5-10 minute session he'd knock off for the day. One time he got carried away and kept playing for 45 minutes! He quite enjoyed earning the money, counting it afterwards, and depositing it into his savings account. Now that he's finished his music lessons in town he probably won't get a chance to do any more busking unless we're in the city anyway to visit a museum, go shopping or take in a movie.

He's been busy learning Christmas carols in his recorder class, so if we go into the city to visit the Maritime museum before Christmas he may get another chance to busk this year.

His annual busking licence cost me $41 and expires next May. (For Sydney City busking details see this) I don't think I'll renew the licence next year as we probably won't be in the city often enough to make it worthwhile (I pay for the licence so it doesn't cut into his earnings, but I'd like him to make more than the licence cost me, otherwise I may as well just increase his allowance and he can spend the time practicing at home). Unfortunately our local council only allows busking in very restricted areas and the licence fee is exhorbitant, so it's really the City or nowhere.
Posted by enoughwealth@yahoo.com at Friday, November 24, 2006