I bought a new briefcase

I purchased a nice leather briefcase for work a couple of years ago, but unfortunately the combination lock had the bad habit of going into the "reset combination" mode if the catch was knocked as it slide around the car boot during the daily 45-minute commute to work. After spending a fruitless half-hour trying to guess what the new combination had become, I resorted to forcing the lock open. This worked for one lock, but when the same thing happened to the remaining lock I ended up with a briefcase that doesn't latch shut. Time to buy a new briefcase.

I looked around at what was available in the stores, but most cases for $100 or less were simple back-pack or satchel style bag. I wanted a real briefcase for my work papers, and decided that an aluminium briefcase would also enable me to carry my new Dell laptop around in style. It would also be useful for taking my laptop on holiday to Europe with me later in the year.

In the end I chose the Dicota AluSlight case that is designed to hold a 15.4" laptop, accessories and some work papers etc. A quick online search found prices were mainly around $139-$159+PP for this item, but one site (bargain.net.au) had it advertised for $118.80+PP. I ordered it online and was able to pay via PayPal.

I was a bit surprised that the PayPal receipt eventually showed the amount in USD rather than AUD, but with the Aussie dollar at almost US$0.95 it's still cheaper than the other advertised prices. I tried phoning the online store to complain about the unclear pricing, but got a voicemail service and gave up. I'm now just hoping that the product is actually delivered! I have the Paypal receipt, but I have no idea what the procedure is for seeking a refund from Paypal if goods aren't delivered. The bargain.net.au voicemail service makes me doubt I'll have much luck chasing up this order if it doesn't arrive in the promised 3-5 days. And the USD pricing makes be suspect that they may not be trading within the jurisdiction of the NSW Department of Fair Trading...

Anyhow, fingers crossed that my shiny new briefcase arrives in one piece in the next couple of days. 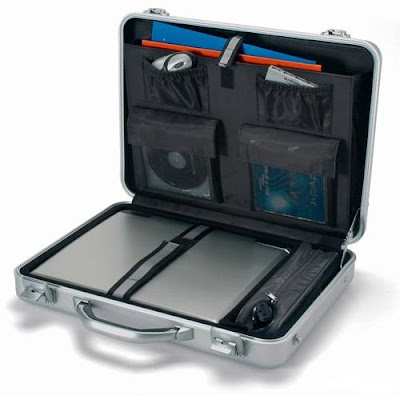 Copyright Enough Wealth 2008
Posted by enoughwealth@yahoo.com at Wednesday, May 07, 2008

I am quite sure that you need to be a registered Australian business in order to have a .com.au domain name. They should have an ABN somewhere on their site. If that's the case, you might have some reprieve through the Office of Fair Trading.