A mediocre month with my geared stock portfolio down a bit (-$35,025), our home valuation down slightly (-$5,183) and my retirement savings up fractionally (+$1,887). DW needed to redraw $1,000 from our home loan account to fund her payment of stamp duty on an apartment she bought 'off the plan' last year, so the same amount was redrawn and sent to my savings account (as we split all transactions on our home loan 50:50 as our house is in joint name - the home valuation I list is only for my half).

Next month we'll be signing an MOU agreeing to sell our house as part of the consortium of local home owners that have banded together to market a contiguous block of ~60 properties to developers that are interested in building apartment blocks on the combined site (due to its proximity to the new hospital being built nearby). It's hard to guesstimate what the final sale price might be, as the local council still hasn't brought out the draft 'Precinct Structure Plan' regarding future development of the land lying within the 'special area' around the hospital site. My current home valuation is based on current 'normal' house sales data for our suburb. If a developer buys the property it *could* be worth 2-3x that amount,  but...

The hospital precinct structure plan was originally supposed to be released in late 2015, then delayed until March 2016, then May/June, and currently the report isn't due to be reported to council until later this month... and it then has to be released for public feedback, revised, and finally adopted. So any possible rezoning to allow height/density increases won't happen for quite a while yet... initially agents spruiking their services to our consortium were saying that the marketing campaign wouldn't need to wait for rezoning to occur, and that developers would be interested in buying the properties anyhow, Now that we've appointed a real estate agency group and have a lawyer ready to draw up the 'MOU', they seem to have changed their tune, and any sale might be a 'put/call' option to buy the properties if/when a favourable rezoning takes place. 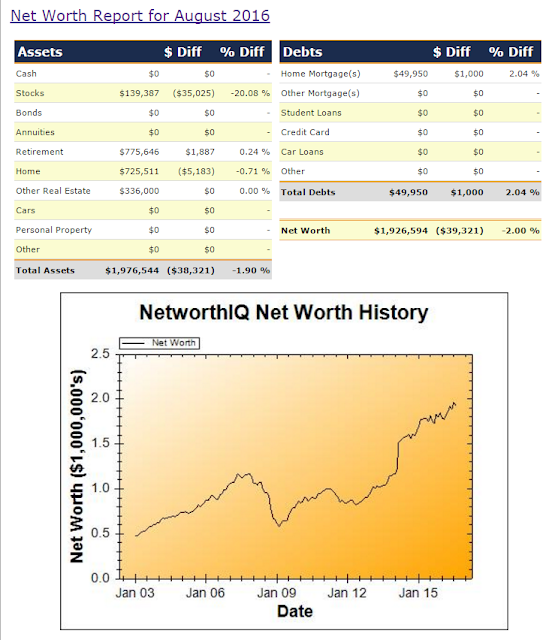 The chart is quite misleading, as it appears as if I've recovered all the losses that occurred during the GFC/EFC. In reality the large jump in 2014 was when my parents gave me their hobby farm, so I still haven't recovered the stock losses crystalized during depths of the GFC.

Subscribe to Enough Wealth. Copyright 2006-2016
Posted by enoughwealth@yahoo.com at 4:21 pm