Review of my nCoV model

Well, a week after I did my crude 'model' of corona virus case rate and lethality, it looks like the rate of spread has been substantially reduced (by heroic/draconian containment measures in China) from new cases increasing by ~30% each day a week ago, to ~11% increase each day currently (as at WHO SITREP #19). That has meant that the rate of new cases has gone from increasing exponentially to 'only' increasing by around 3,000-4,000 new cases per day for the past 5 days.

The current day deaths/cases ratio has remained constant at around 2%, but due to the delay between new cases being reported and resolution of the outcome (recovery or death), the 'T-4' ratio is probably trending towards the eventual 'true' lethality rate (assuming an accurate number of total cases is ever fully known). The 'T-4' ratio has been steadily decreasing, from around 5% when I did my 'model' a week ago, to 3.5% as at Sitrep 19. So it looks like the final fatality rate may end up being around 3%, which would still 50% higher than the 2% 'current day' calculation that is generally being reported.

If the current rate of new cases remains fairly constant at 3,000 cases/day we would continue to see about 100,000 new cases reported each month in China, which would result in 2,000-3,000 deaths per month. Hopefully the rate of new cases will start to reduce significantly, but the planned end of the industry closures around China tomorrow (Feb 10) might make that more challenging. If closures are extended (again), or the resumption of travel and reopening of offices and factories causes a spike in infections the impact on the Chinese and global economies could be significant. At the moment I'm in a 'wait and see' mode, having started to reduce my allocations to equties for the moment. 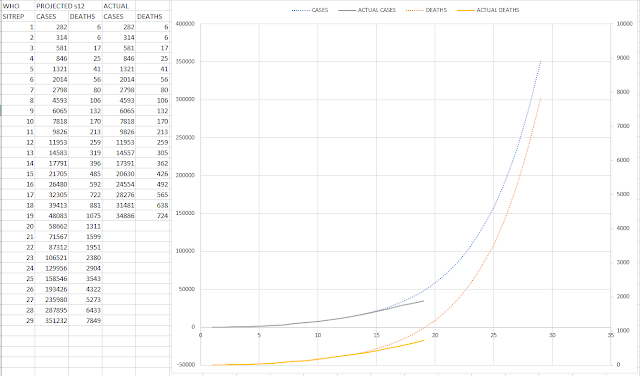