Well, the official WHO SITREP figures are looking a bit dodgy, especially in relation to China. There was a period of optimism when the rate of spread in China seemed to be slowly substantially, only to see a 'one off' jump in reported cases when China decided to include cases detected 'diagnostically' (via x-rays etc.) rather than only reporting clinical cases (confirmed by lab tests). A few days later China reversed track and decided to again only report clinically confirmed cases. Personally I think the data shows that China was simply unable to keep up with the volumes of lab testing required, so for a week long period had been under-reporting new cases, and then added in the 'one off' diagnostic figures in an attempt to correct the data. The plot of calculated fatality rate (using current day, T-1, T-2, T-3 and T-4 calculations) clearly shows that the death rate had been climbing during the week that low numbers of new cases were being reported by China - indicating that the number of new cases was under-reported (hence pushing up the fatality rate). The 'one off' inclusion of diagnostic case numbers brought the fatility rate back down to the previously calculated percentage. And the recent 'low' daily increases has again seen the calculated fatality rate increasing to above 3%. This again suggests that the 'clinically reported' numbers for new cases is too low, and may be due to lab capacity being stretched, rather than an actual decline in the rate of spread.

Fatality rate (deaths/reported cases) using Current Day (T0), previous Day (T-1), etc as the denominator (rationale being that there is a lag of several days between a case being reported and average time of death in those cases that result in death): 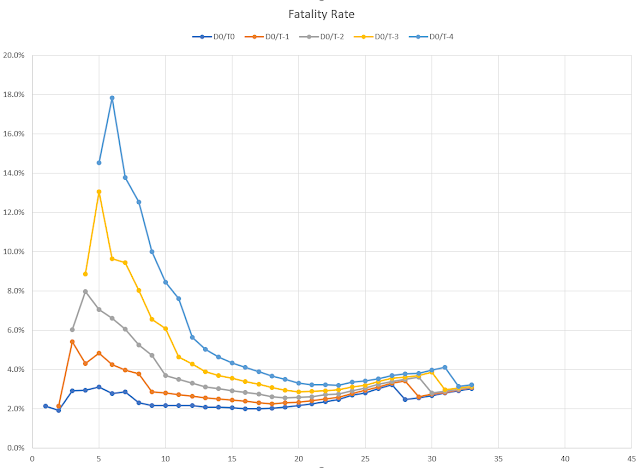 Plot of my initial projection of spread of COVID-19 and 'actual' (reported) cases. Shows the uncertainty in cases numbers, due to changes in how China was reporting COVID-19 cases (clinical only, then including 'diagnostic' cases, then back to only including those confirmed by lab tests...). The trend in deaths seems to suggests that the number of reported cases is too low (as it is unlikely that the disease is getting more lethal): 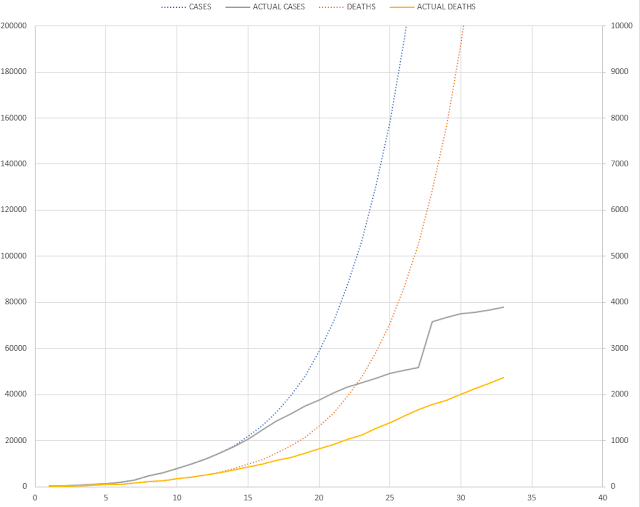 Globally the rate of spread still appears to be exponentially increasing, but starting from a low number of initial cases, and has not yet shown any signs of being brought under control. The next month or so will show whether or not this outbreak will be contained globally, or if a true pandemic will evolve. 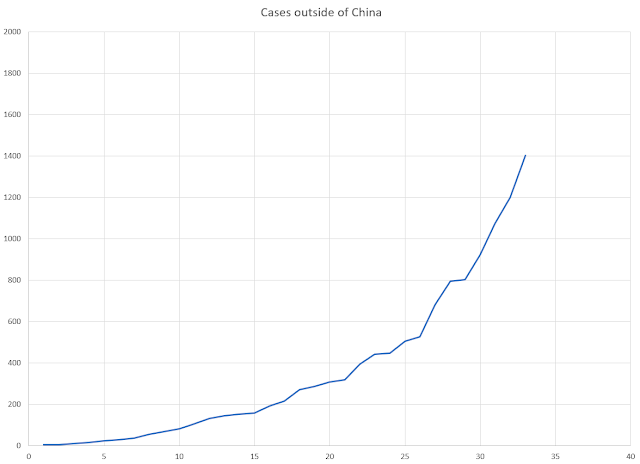