As can be seen in the chart below, Investors in the Aussie share market have basically gone nowhere since the start of 2007. That's right, practically 0%  gain over the past decade. In comparison, despite the impact of the GFC (which the US caused, just to rub salt in the wound) the US S&P-500 index has made a respectable 60% or so gain since the start of 2007. Go figure. 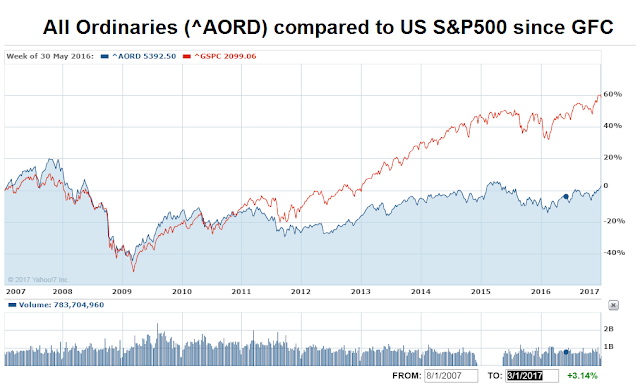 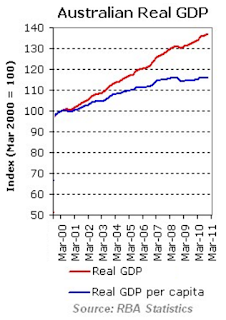 Sure the Australian 'mining boom' came to end during the past decade. And the economy suffered a lot from the GFC. But even so, we haven't had a recession for more than a quarter of a century, and our GDP is actually up considerably since the GFC. In fact, the Australia stock market since the GFC has performed eerily like it did during the Great Depression.

To make matters worse, I invested shares with gearing, so I've been paying interest for the privilege of making no money for the past decade! And DW is more interested in property investing than the stock market, so I can't even whinge about the poor stock market performance without getting an "I told you so" ;)

Including dividends the ASX total return index is up 52% compared to the end of 2006. The S&P 500 is up 92% including dividends. The 52% doesn't include franking credits, so including those the gap is smaller. OTOH there has been a slight fall in the Australian Dollar over the period which improves the S&P 500 performance in AUD terms (107% gain in AUD terms). BTW the MSCI World Index gained 59% in AUD terms over this period and so the Aussie market is actually pretty average.