With the recent run-up in the US stock market, my boss has recently been moving his (and his parent's) investments out of equities and into 'cash'. He claims he moved out of equities and into cash in early 2007, so perhaps he knows what he's doing? However, while the US market certainly looks similar to the pre-crash phases seen in the dot-com bubble from 1996-2000, and the 'frothiness' seen in 2006-2007 just before the GFC, the Australian market looks quite unremarkable at the moment.

So, I'm not about to liquidate my stock portfolio (in fact I recently bought $10K worth of the Vanguard Australian Shares Index ETF (VAS)). However, if the US stock market does suffer a large 'correction' in the next year or so the Australian share market may well drop a bit also - but I'll probably view that as a buying opportunity. Looking at the graph comparing the All Ords and the S&P it is clear that the long-term trend (at least in Australia) has been for a fairly steady rise over the decades, but that there have been many substantial deviations both above and below the trend line. If you are heavily into stocks, deviations well above the trend line are probably a good opportunity to reduce exposure to equities (or at least reduce gearing), and deviations substantially below the trend line are good times to move any available cash into equities. Bearing in mind, of course, your personal risk tolerance and chosen long-term asset allocation.

However, human nature dictates that many people will be tempted to start investing in the market during bull runs, and then move into cash after a stock market crash - exactly contrary to what logic dictates. 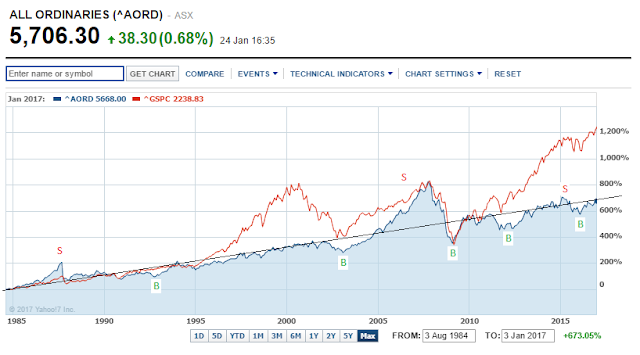