DS1 was interested in getting a pet, so as a first attempt I decided to get him a small aquarium with one fish to look after. Rather than buy a tank from the pet shop, I simply chose a nice cylindical salad bowl from the discount housewares store. For only $5.00 it was lots cheaper than the smallest perspex tank available in the pet stores, and it looks very stylish. Being microwave and dishwasher safe it should cope with having a small 7.5W immersion aquarium heater. For decoration we simply washed some especially pretty marbles that we already had collected, and put them in the bottom of the "tank".

The trick with beginner aquaiums is too not buy one that is too small - it's a lot easier to keep fish healthy if there is plenty of surface area and not too many fish. As DS1 is seven years old he should be able to care for and feed the fish - it only needs a partial water change once a week with aged (dechlorinated) tap water and twice daily feeds. I bought specialist betta food pellets and some free dried blood worms - a few worms in the morning and 2-3 of the tiny food pellets each evening should keep the fish happy and not overfed. As DS1's favourite colour is green we visited five different pet stores/aquarium shops before finding one that had a nice pale emerald body but red and blue fins. There are much more spectacular green betta splendens bred by hobbyists, but you tend to get mediocre quality fish in the typical pet store. If DS1 manages to keep the fish alive for the next two months I'll think about buying a female betta - siamese fighting fish have quite interesting breeding behaviour with the male blowing a bubble nest and looking after the hatched fry until they become free swimming (at which time he'll often eat them, so you need a some spare compartments to keep the male and female adult fish when breeding bettas). If he's lucky (and carefuly looking after the fish) he may be able to breed some fish and sell them as a hobby.

All up the cost was:
It paid off to compare the prices for the fish food and heater as we went around looking for a suitable fish - the heater was bought for $39.95 after seeing the same one in other shops for $49.00. Similarly we were able to buy the "bulk" 20g pack of Hikari Betta Biogold food pellets for $15.05 after only seeing the smaller 2g pack in other stores for between $7 and $8. Assuming the fish lives long enough to eat the entire pack it will work out to be good value. 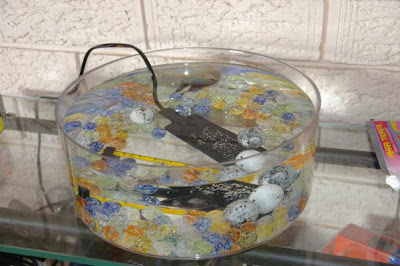 Posted by enoughwealth@yahoo.com at Sunday, September 16, 2007