This month my NW decreased by -$52,659 (-2.06%) which was a great result considering the state of the global markets. Our house price estimate actually increased, which offset most of the losses on my retirement savings and investment portfolio. I managed to time the switch of our SMSF investment from 100% Vanguard High Growth Fund into a 70:30 allocation to the Vanguard Conservative and Bond Funds, so our SMSF investments declined by 5.37% compared to the 20.54% loss we would have suffered if we had remained invested in the High Growth Fund. I had also sold off a large portion of my geared investment portfolio held outside of super, but bought a small tranche of Westpac shares in early March (which had lost considerable value by the end of March), and also bough some additional investments at the end of March which had gone down slightly in value as at 31 March.

Looking forward the property market may well cease to rise, given the likely increase in unemployment and general decrease in consumer confidence. However, this *might* be offset by a flight of investors from equities into property - as happened after the 1987 crash. The property market situation will also be affected by the ban on on-site auctions and 'open house' inspections in Australia, but although that will reduce volumes it may not directly impact prices.

I suspect the equity markets will continue to be highly volatile (obviously) and may well suffer further losses before reaching a 'bottom'. Covid-19 cases worldwide are heading towards $2MM+ and deaths over 100K during April, which is likely to erode any residual economic optimism fostered by the vast stimulus/support packages enacted by Central Banks and governments around the world during March. So for the moment I'm leaving out retirement savings with a conservative bias, and will cautious about increasing my equity investment portfolio too much while markets remain volatile and the economic outlook unclear. 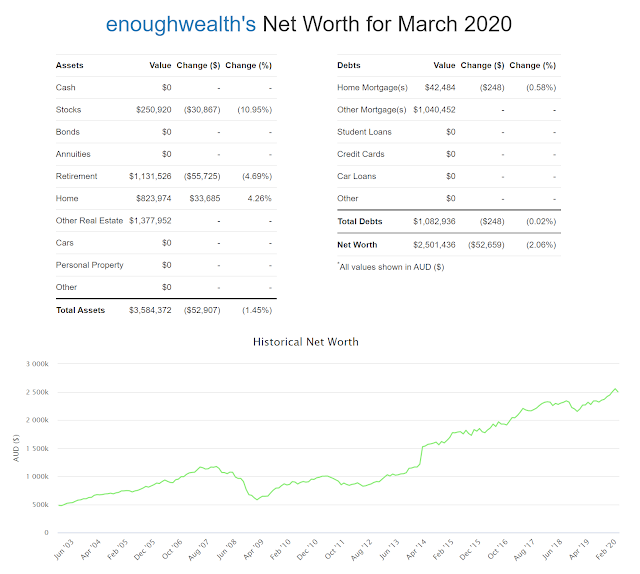