An interesting log-log plot of new cases in the past week, vs. accumulated cases seems to be a good indicator of when a country has 'flattened the curve' effectively. While it is impossibly to completely eradicate Covid-19 once it gets into a community/country (given that many infected people are essentially asymptomatic while contagious, so won't be detected as testing the entire population on a continuing basis is impossible), some countries have managed to reduce the number of new cases per day (the 'natural' trend is for infection rates to keep rising until most people are either infected or immune). Other countries still seem to be struggling to get on top of the spread while total cases are still small. Australia seems to be in the 'club' of countries that have managed to put in place measures to reduce infection rates at a fairly early stage (while total cases were still relatively small) - the other countries being Taiwan, Hong Kong, Japan(?) and South Korea. 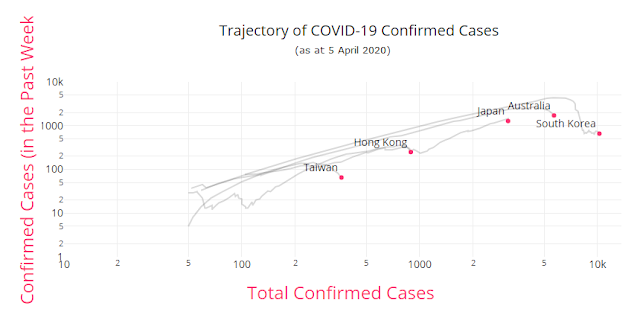 Other countries seem to have also put effective controls in place (China), or have signs of progress (Spain and Italy) but at a much later stage (when case numbers and deaths had already escalated):

And other countrie have yet to show any sign of getting the situation under control:

However, Japan provides an example of where the infection appeared to be under control for a while, but then took off again. So, until a vaccine is available, efforts to minimise spread will have to be maintained, either continuously (at massive economic cost, but minimising deaths from Covid-19), or intermittently (or less stringently) so that either 'peaks and troughs' or infection (that the hospital capacity can manage) occur, or a steady, relatively low rate of infection is maintained.

Email ThisBlogThis!Share to TwitterShare to FacebookShare to Pinterest
Labels: Covid-19