Is China still a 'developing' country or is it a 'newly developed' country?

Recent speeches by Trump and Morrison claimed that China is no longer really a 'developing' country, but a 'newly developed' country. The implication being that much of the 'special treatment' it obtained in relation to international trade and climate change should now be wound back.

But is China now a 'developed country' or is it still 'developing'?

A couple charts suggest that it is indeed now a 'developed country':

While still less urbanized that the US, Europe or Australia, China is now at a similar level of urbanization that Europe attained by the 1950s - which suggests that on this measure it is already 'developed'. And it looks to be on track to be just as urbanized as Europe and the US within a decade or so in any case. 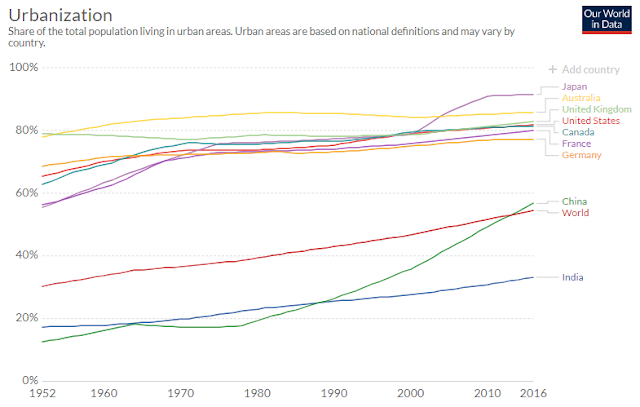 2. Per capita GDP and electricity use

While China already uses as much electricity per capita as the UK (which accounts in large part for its massive increase in carbon emissions since the Paris agreement was drawn up), it still lags far behind the US, UK and Japan in terms of current GDP per capita. On the other hand, China's GDP is already around that was enjoyed by citizens of the 'developed world' back in the 1950s. So although it can be argued that China is still a 'developing nation' relative to the affluence of Western nations, in absolute terms it is already a developed country (unless we choose to believe that the US, UK and Europe were NOT really developed countries back in the mid 20th century?). 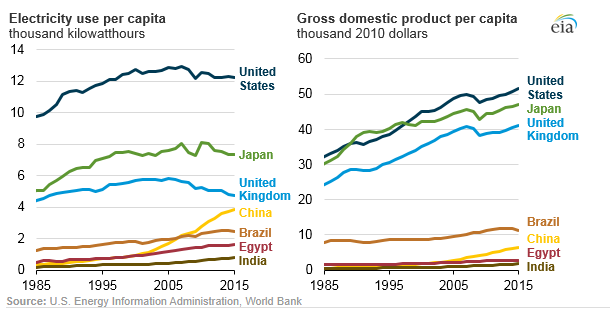 Of course aside from not being a 'developed' nation, another argument put forward for why China should not need to curb carbon emissions as much as 'developed countries' is the notion that it isn't just a country's current emissions that should be taken into account, but also the cumulative emissions of a nation. While this seems reasonable on an equity basis, the reality is that global warming is being driven to catastrophic levels by the rate of current emissions - the impact of emissions prior to 1970 on the global climate just wasn't all that significant.

A final chart of GDP growth rate also seems to indicate that China may be leaving the era of  'developing' and is now joining the club of mature, developed economies (that have lower, sustainable growth rates):

Subscribe to Enough Wealth. Copyright 2006-2019
Posted by enoughwealth@yahoo.com at 5:40 pm