Buying an investment apartment 'off the plan'

They have been excavating the foundations for a new high-rise (150m/47 stoery) apartment block nearby where I work since before my employer moved offices to St Leonards in June last year. I decided to look up what was being built there ('88byJQZ') and found out that while the initial release of apartments 'off the plan' was done when the project was announced in Feb 2018, a third 'phase' (or tranche) of units had only been released for sale a few weeks ago.

As the Sydney property market appears to have (maybe) finished its 'correction' during Q2 2019, and there has been a massive drop-off in new developments now planned/getting approved, I've decided it might be a reasonable (good?) time to invest. The new apartment block is close the the St Leonards train station (which is five stops from the Sydney CBD) and will also be close (~250m) to the new Crows Nest Metro train station that is due to open in 2024 and will be only a few minutes from Barrangaroo Metro station and the CBD.

I enquired about available one-bedroom apartments, and this release offers a selection ranging from $780,000 for one on the second floor (with 'views' of the other 26 storey apartment block that is also under construction), up to $1m for a one-bedroom apartment on the 39th floor that has views from the balcony towards the Sydney Harbour Bridge and parts of the harbour and CBD skyline (and probably also some distant views of the Pacific Ocean). While it is a one-bedroom apartment, the apartment I was interested in also has an extra 'study' room located where the elevator shaft for floors 1-26 is located on the lower levels. This increases the apartment's floor area and provides a 'spare room' that could be used as a home office, nursery, or overnight guest accommodation. I decided on buying that unit and paid the $5,000 'holding deposit' while my solicitor reviews the contract.

The required deposit will be $100,000 (10%) which I'll fund out of my existing, undrawn 'portfolio loan' account (secured against our home equity). The apartment block is due for completion in Q1 of 2023, and which time I'll need to arrange an interest-only investment loan for the balance ($900,000) due at settlement. 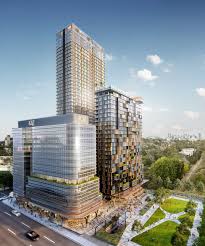 At current interest rates, average rents for one-bedroom apartments in this suburb, and the estimated costs (management, rates and strata levy) this investment unit would produce a negative cash flow of around $15,000 pa. As this would be negatively geared, the impact on my 'after tax' cash flow should be considerably less ($10,000 pa or so). The average rate of price increases for units in Sydney over the past 25 years has been 5.9%pa, which would equate to around $59,000 of unrealised capital gains pa. Any eventually capital gains would (under current rules) be taxed at half my marginal tax rate (and if I sold the unit when I am retired, my marginal tax rate may be considerable lower than my current marginal tax rate).

Of course, the actual outcome will depend entirely on future (unknown) changes in the main risk factors:
- will Sydney property prices continue to rise over my investment time-frame of 9-16 years?
- will prices drop again/more? By the time of settlement (2023) when I need to arrange a mortgage?
- will prices drop over the 9-16+ year period that I intend to hold onto the investment?
- if so, will the rise be the 'typical' gain of 5.9%pa of the past 25 years? Or more? Or less?
- can the average rental be achieved? Will this new, 'luxury' apartment rent for more than the average? - will there be a high vacancy rate and/or pressure to reduce rents (there are a couple of other high-rise apartment blocks currently being completed in the area, or due to start construction)
- will the current (historically low) interest rates persist? or will my mortgage costs rise significantly?
- will I be able to fund the negative cash flow out of my employment income? (ie. will I be retrenched before my planned retirement age?)

Many of these factors are unknown but have significant downside risk - for example the global economy appears to be slowing, as does the Australian economy. Whether or not that results in recession, higher unemployment, and lower real estate prices is impossible to predict. As is the likelihood of significantly higher interest rates (at the moment we still seem to be in period of declining interest rates). Or lower rental returns and/or high vacancy rates.

I've done some rough calculations of possible outcomes assuming typical rates of rent increase (3%pa), current interest rates (4-5.5%) for my portfolio loan and the required mortgage, and price rises ranging from 2%pa-8%pa. At a 'typical' rate of price growth (6%pa) over 9 years I would end up with a capital gain of around $500,000 (assuming current interest rates, low vacancy rates and achieving 'average' rental rates that increase by 3%pa). If price rises averaged 'only' 2%pa over the next 9 years (eg. a double dip slump in property prices in the next couple of years if Australia has a recession, followed by economic recovery and return to 'typical' rates of property price rises) I would still make a small profit over 9+ years. Indeed, even assuming 2% average price rises over the next 9 years, and interest rates rising 1% I would still end up slightly ahead.

I haven't taken into account the modest price differential for completed apartments compared to their 'off the plan' price (often around 10%) - due to people preferring to purchase a home that is ready to move into. Hopefully that builds in a small 'buffer' in my projections.

Of course the 'worst case' scenario is fairly dire - for example a severe recession with property prices dropping, lower rental returns and high vacancy rates, and/or higher mortgage costs. We'll see how things turn out - this feels a lot more like a speculative gamble than an 'investment', but I suppose that is always the case when you head off towards the pointy end of the return-risk relationship...