As I previously posted my next-door neighbour wants to add a couple of feet of new retaining wall to the existing brick retaining wall, demolish, realign (our respective property identification surveys disagree on which side of the brick wall the boundary is), and replace the existing wood boundary fence (which has started to rot due to the earth he piled against it soon after he moved in). Initially he tried to sell me that this work would be an improvement that would "add value" to my property, and that he was only asking for half the cost of the new boundary fence - he would generously pay for the cost of increasing the height of the existing retaining wall.

Since I didn't agree with my neighbour's "generous" proposal (and in fact complained to council about his intended works, and told him to send future correspondence on this matter via my solicitor), he has now officially demanded payment for half the total cost of his intended building works along the boundary (around $4,500). It looks like this will end up going to the Land and Environment court, so today I had to give my solicitor the go-ahead to spend around $2,000 getting the boundary properly pegged by a surveyor and to get a report from a geotechnical expert on the current situation and what drainage problems my neighbour has already caused by his previous "landscaping" efforts. The black line on the picture below shows how high the earth has been piled against my neighbour's side of our boundary fence! 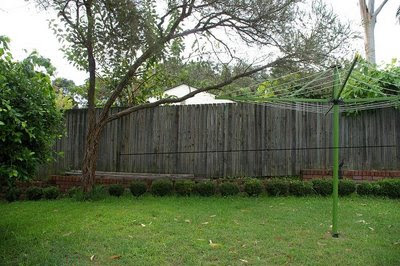 My solicitor is also going to send me a costs agreement, as his bill will most likely exceed $1,000 if this matter does proceed to court...

On a purely economic cost:benefit basis it may end up that I would have been better off just letting my neighbour do whatever he wanted - but I want to defend my rights and the amenity of my backyard, even if it costs me a several thousand dollars.

Posted by enoughwealth@yahoo.com at Thursday, June 11, 2009

You're crazy. YES to looking after your rights. YES to getting the boundary resurveyed so it's resolved but NO to doing everything through a solicitor.

Have you told the neighbour that s/he is building on your property?

Have you sent them a letter stating that if they proceed with building on your property, and their works need to be dismantled, that you will lay any and all costs - including legal and other fees - at their door?

First step would be to tell them that you want to find a simple and neighbourly solution and you'd like to know what *their* interests are in terms of the boundary area.

I already went through the process of discussions with neighbour, letters to neighbour, complaints and letters to council, inspections and advice from the council. All this went on for several months BEFORE getting a solicitor involved.

So it's a bluff, or the neighbour - assuming you are correct in terms of boundaries - is just nuts.

Sometimes people are just nuts. Mad as cut snakes. But you need to give cut snakes an out. A path to salvation. A means of backing down. Solicitors are not good at this. Good luck with it all.