A whiff of panic in the air

Today the Australian government announced a second economic stimulus package of A$42 billion on the same day that the Reserve Bank slashed official interest rates by another 100 basis points (1%) to a 50-year low of 3.25%. It appears that the full impact of the GFC on our local economy is finally being admitted by the government, with an element of panic as a technical recession seems unavoidable and the steps taken in 2009 woefully ineffective. The series of interest rate cuts in the past six months is unprecedented. Most charts though underplay just how dramatic the fall has been, choosing to use simple bar charts showing the series of rises and cuts as if they were evenly spaced: 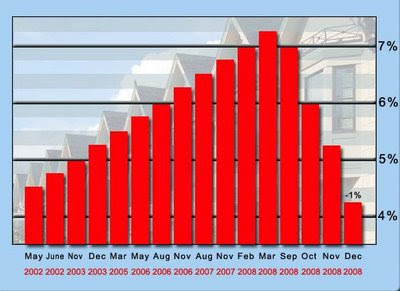 In reality, plotting the changes against time shows that the controversial interest rate rise during the last election campaign was "one too many", and after making jsut one unusually large cut in March 2008, the RBA held fire for a long while, probably expecting the single cut would be enough "shock therapy" to insulate Australia from the impacts of the sub-prime crisis. It was only in Sep/Oct last year that the magnitude of the GFC became apparent, with the drop in economic growth rate in China showing that Australia couldn't hope to avoid being affected.

So far I've tried to keep my stock portfolio as intact as possible, only selling the minimum necessary to avoid getting a margin call. But looking at the stock market and interest rates over the past 5 or 10 years it doesn't look like we're going to see a recovery any time soon. However, I'm too stubborn to give up on my long-term "buy and hold" strategy and high-risk asset allocation. So I think I'll still hang in there in the expectation that the Australian economy does start to recover in the second half of 2009, and that the stock market recovery leads the economy by the usual 6 months or so. However, if the stock market continue to fall I'll be forced to sell off stocks fairly rapidly to settle my margin loans. In the worst case I could end up with no direct stock investments, no margin loans, but a $250,000 HELOC debt (my St George "portfolio loan") offset by only $50,000 or so value in unlisted funds (such as Ord Minett OM-IP) and agribusiness investments. Those investments don't mature for several more years, and the unlisted funds only have a price guarantee if held to maturity. If that happened I probably wouldn't be in a position to reinvest in stocks when the market eventually recovers, so I'd be unable to recover my losses even in the market reached new highs at some time in the future. C'est la vie.

Posted by enoughwealth@yahoo.com at Tuesday, February 03, 2009

I can commiserate on the margin loan issues. I've been forced to sell some of my portfolio to meet margin calls on the way down. However, thankfully my holdings are pretty small compared to my savings rate, so have been able to maintain the reduced portfolio, and also buy back about half of the forced sales at prices below the margin call price. Been a financially educational year!

Friend I suggest you strongly consider selling down everything. Why? Your investments will take a considerable amount of time to come back to where they were previously, and in the meantime you could be paying down debt and reassessing your position. I know you're a long-term holder, but this global credit crunch is contributing to a situation that you young sprats have never seen before. Héll, you've never really seen a proper recession. Sometime soon, credit lines (which you keep open, once you have them) will be cheap as chips but ONLY available to those who have some cash to back them up. At that point you can again consider leverage and careful investment selection (your criteria here).

Long-term and short-term is all relative. One person's idea of long is another person's idea of short. Many convince themselves that long-term speculation is somehow legitimate while short-term speculation is not. In reality they are both the same. If we can expect markets to be irrational in the short-term, why can't be expect them to be irrational in the long-term?