The rebound in stock markets during April pushed up the value of both my geared share portfolio and SMSF investments, gaining 3.27% and 2.71% respectively during April. We're still invested 70% in the Conservative Index Fund and 30% in the Bond Index Fund in our SMSF, with only a small ($2K/mo) ongoing investment of cash into the High Growth Index Fund. We thought about shifting part of our SMSF investment back into the High Growth Fund in mid April, but decided the market is likely to remain volatile until the scope of the economic impacts of Covid-19 become more predictable, so stayed invested relatively conservatively for the time being. By the end of April this strategy was looking costly as the markets continued to rise, but the large single-day drop on 1 May suggests that we may be right after all. In the current situation I'd rather suffer from modest returns by being invested conservatively, than suffer from large capital losses by being too aggressive too soon.

Our estimated house price remained unchanged in April, with real estate sales subdued due to social distancing rules, and prices likely to be weak as unemployment (and underemployment/wage cuts) impacts both consumer confidence and enthusiasm to take on large mortgages. If the unemployment and economic impacts of Covid-19 aren't too severe in Australia, and the economy starts to pick up again later this year, then property prices may be supported by a move of investments out of equities and into real estate (it happened after the '87 crash made a lot of 'mum and dad' investers wary of the stock market).

I haven't revalued my 'off-the-plan' $1m unit investment or my holiday home/hobby farm (as usual). Valuation of the off-the-plan unit based on recent unit sales data in the suburb is likely to be imprecise, as the new unit development will put a lot more stock into the market when constuction ends in 2023, and the new units are relatively 'high end' compared to existing, older units in the area. I'll only start tracking the valuation of my apartment after get a valuation done for a mortgage when settlement is due upon completion of construction. Best guess is that it *might* be worth about 10% more now than when I entered the contract last year, which would cover the stamp duty I've paid and selling costs. So I don't appear to have lost money on that investment at the moment.

The rural property is just being left at the valuation used when it was transferred into my name. I intend to leave it to the boys and never sell it, so it seems rather pointless to include any notional gains in my personal net worth tracking. In theory it's probably worth about $600K now, compared to $325K when I took title. 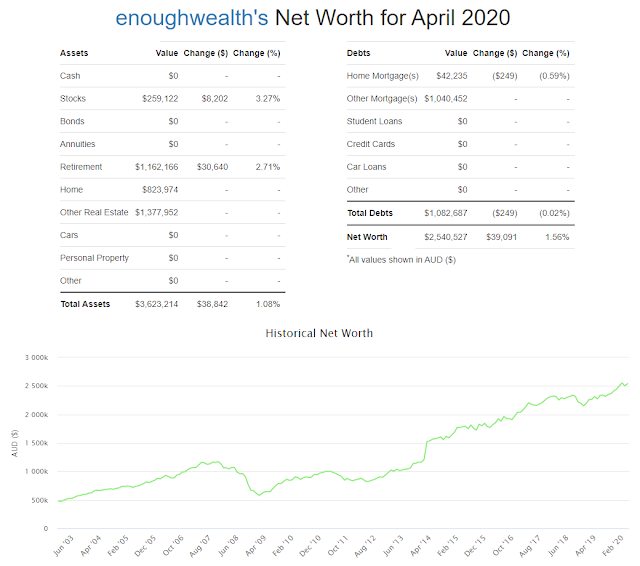