Impact of my weight loss on hypertension control

My mother has high blood pressure and requires medication, so several years ago I bought a cheap sphygmomanometer (self-inflating wrist blood pressure monitor) to keep an eye on my blood pressure readings. As I got older and put on more weight (I was never 'slim') I noticed my blood pressure slowly creep up to often be around 160/85 (isolated systolic hypertension). My GP tried a couple of different medications before it was brought back to 'normal' (~120/80) by taking 300 mg/day of Avapro (Irbesartan) medication (an angiotensin II receptor blocker). After a while my blood pressure was consistently less than 120/80 while taking 300 mg/day, so the dosage was able to be reduced to 150 mg/day.

While losing weight from 112 kg down to 92 kg I've noticed that my blood pressure readings were often lower than 'normal' - for example 95/65 was quite common. Reading up on the 'keto' (low carb) diet I started last week, I found that often blood pressure will decrease by around 8 mmHg after 6-8 weeks on a 'keto' diet regime. So I decided I should check with my GP if it might be OK to reduce my medication dosage.

She confirmed that I can reduce my dosage to 75 mg/day, and, subject to the readings staying 'normal' on the new, lower dose, I might be able to reduce it even further (to half a 75 mg tablet per day) or even stop taking the medication completely when I've stabilised my weight at my target of around 80kg. 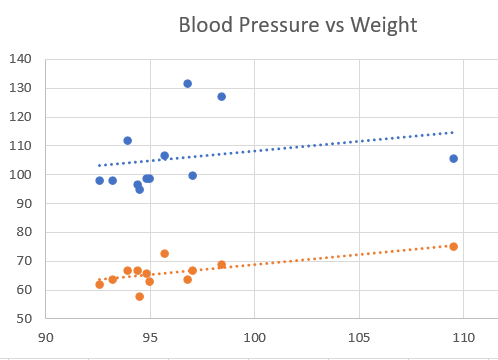 (nb. as I've been losing weight the more recent data in on the LHS and the oldest data on the RHS)

I might also try to reduce my sodium intake (eg. minimise bacon and ham etc.), as I suspect I am 'sodium sensitive' - so consuming 3,200 mg/day of sodium on average (over the past four months) is probably also excessive if I want to control my hypertension without medication.

By simply replacing the 100 g of ham and the 100 g bacon chop with two 125g portions of plain grilled chicken breast I can reduce my sodium intake to the recommended level (and also reduce my carbs):

I'll start off by not having the planned bacon chop tonight (instead I'll grill some chicken breast portions), and I'll cut out the morning ham from tomorrow onwards.