Where to with regard home loan interest rates?

Recent interest rate cuts to 'historic lows' in Australia, combined with high property prices (especially in Sydney and Melbourne) have lead to a lot of speculation about how low interest rates will drop (after yesterday's 0.25% cut I've seen some pundits predict a further two cuts by the middle of next year), and when/if rates will increase again -- and by how much.

This is an especially hot topic amongst comments regarding property prices and loan affordability. Many comments are along the lines of 'prices are too high, and will drop 40% or more' -- which reminds me a lot of Dr Keen's prediction about a '40% fall in property prices) back in 2008. Many of the comments also assume that the current low interest rates are an aberration, and that home loan mortgages *must* rise substantially -- which will lead to mortgage stress and potentially a significant rise in mortgage defaults.

I've cobbled together a couple of historic charts of Australian average 30-year home loan interest rates below, and extended it to include recent rate changes. This chart shows that the current home loan interest rates might actually be 'normal' for an economy with low growth rates and inflation, and little prospect of major rises in productivity (unless AI turns out to have as big an impact as computerisation and robotics had in the 1970s-2000s). 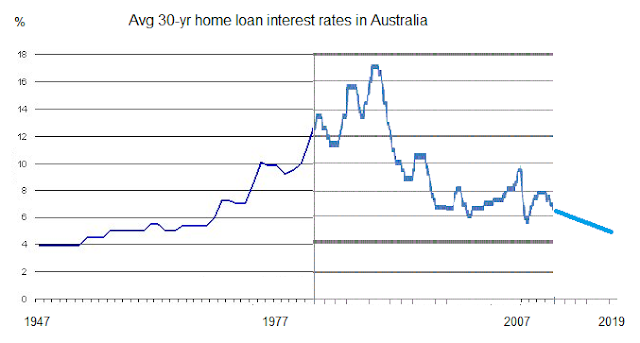 Subscribe to Enough Wealth. Copyright 2006-2019
Posted by enoughwealth@yahoo.com at 3:20 pm