My CityIndex CFD trading account has been inactive for nearly a year (I had open Long positions in the ASX200 share index, and in crude oil), so they sent me an email notice that a) if an account is inactive for more than 12 months there is a fee charged, and b) that if I did three 'round trip' trades I would get $100 credited to my account. Since I have to do some trades to avoid the inactive account fee, I decided to do the three trades. My first new trade was similar to my existing ASX200 position, I simply bought the minimum quanity for the ASX200 SPDR CFD. For my second trade I bought a tranche of Gem Diamonds CFD, as there seems to have been a dip in the long-term up trend. For my third trade I have shorted the Tesla CFD (although the market was closed when I entered my trade, so it hasn't been executed yet) as it seems to have been drifting down for the past year, and recent movements of top executives and quirky behavious by Elon Musk suggest this stock could head further south for a while.

Anyhow, these trades are speculation rather than investing, so if I'm lucky and I make a profit I'll close out the three new positions to meet the 'round trip' requirement to get the extra $100. I'll keep my long positions in the ASX200 and crude oil open until it seems to be a good time to close out. 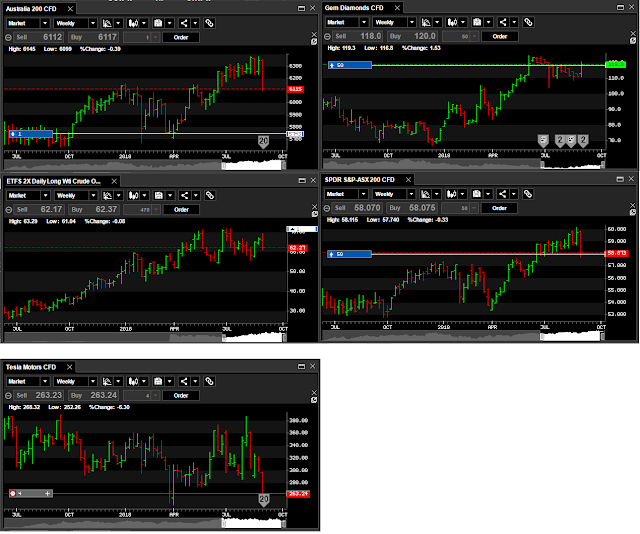 Email ThisBlogThis!Share to TwitterShare to FacebookShare to Pinterest
Labels: CFDs