Despite weakening during the last week on February, overall the Australian and International stock markets made gains during the past month, which gave a positive boost to the valuations of my geared stock portfolio and also to my retirement savings. House prices in Sydney continued to rise, although at a less frenetic pace, which resulted in another small increase in the valuation of my interest in our home equity. So, overall, my NW was up during the past month - reaching a new 'all-time high'.

Since being retrenched in January, DW has been enjoying spending more time at home and being able to meet DS2 after school every afternoon (the timing of her redundancy fit in nicely with DS2 starting at his new OC school and not attending after-school care). She is only just now starting to look for new employment opportunities. She was provided with access to a recruitment/career coaching service as part of her redundancy package, and has been taking the opportunity to update and polish her CV and get some tips on finding and applying for a new job. The Australian economy is still rather weak, and while the overall unemployment rate isn't too bad there has been a noticeable shift away from full-time permanent positions to part-time, casual and contract positions. 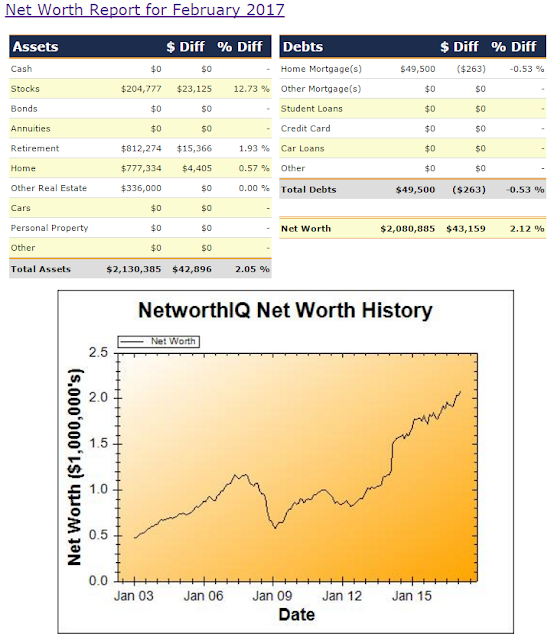 As usual the 'total debts' figure above doesn't include the half-million or so of margin loans, as the 'stocks' figure is the net value of my geared share and mutual fund portolio. The 'other real estate' figure is the valuation of the holiday home/hobby farm at the time I 'inherited' from my parents in 2013.

Subscribe to Enough Wealth. Copyright 2006-2017
Posted by enoughwealth@yahoo.com at 4:28 pm