Overall the budget looks suspiciously 'creative' and the projected 'budget surplus' fairly optimistic given that budget projections have not ended up being terribly close to reality in previous Labor budgets. In any case, the actual 'surplus' won't be known until after the next Federal election, so I guess the surplus is being manufactured more as a political tool for Labor's re-election campaign than as a genuine economic tool. Even if the small surpluses projected in the budget for forward years does materialise, the amounts will be totally inadequate to cover any meaningful 'stimulus spending' in the event of another GFC impacting Australia down the track.

On a personal level, we'll miss out on all the budget 'goodies' such as the cash handouts to compensate 'working families' for the impact of the carbon tax of cost of living or to help paying education expenses for our kids, as our combined family 'adjusted' taxable income is just over the FTB A cut-off. As far as Centrelink is concerned, any net investment losses are added back in when calculating our 'income'. I'm sorely tempted to liquidate some of my stock investments that are still in the red, and use the proceeds to pay off a large chunk of the corresponding margin loans. It makes no sense to continue to use borrowed funds to invest when the interest rate on the borrowed funds are stuck around 8%-10% and total ROI (dividends and capital gains) is less than 5%. Since the GFC I've been hoping that the eventual post-GFC recovery would boost the Australian stock market (and hence put my geared investments back in the black), but that has started to look unlikely in the medium term, with the ASX200 remaining below 4500 (well below the pre-GFC high of 6800+) despite the 'mining boom' and Australia supposedly having one of the best performing economies in the developed world, post GFC. How this can be when the US stock market is back to pre-GFC levels despite their enormous government deficit and fire-sale housing market is a bit of a mystery to me.

The changes to the tax rates for 2012-13 for low-middle income earners will mean that DW will pay less tax on her part-time salary and her share of the rental property's net income, and the lowered average tax rates applicable to taxable incomes below 80,000 (shown in the graph below) will mean there is even less point for me to use negatively geared stock investments to reduce my taxable income. However, the raised tax-free threshold is nowhere near as generous as it first appears, as most of the effect of raising the tax-free threshold to $18,200 will be offset by phasing out the Low Income Tax Offset. And by raising the bottom two tax rates at the same time as raising the tax-free threshold, the tax savings really only apply to those earning under $80,000 pa. Overall I think the tax changes will mean DW gets an extra $10 a week or so in her pay packet, while I'll be better off by about 6 cents a week!

With the higher ($50,000 vs. $25,000) annual cap on concessionally taxed superannuation contributions (eg. salary sacrifice and SGL amounts) for those over 50 having less than 500,000 in their superannuation account now not scheduled to come into effect until 2014 (assuming it eventually does happen!), next financial year may be a good opportunity to wind back some of my geared stock investments and plan to investment more of my salary via superannuation rather than using after-tax income to make tax-deductible interest payments on investment loans. 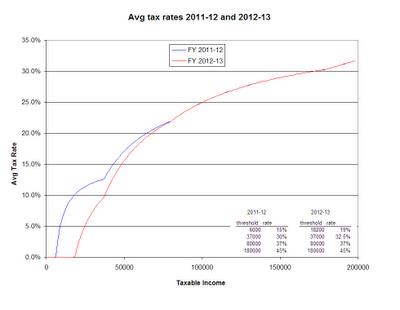 Email ThisBlogThis!Share to TwitterShare to FacebookShare to Pinterest
Labels: budget

Was a classic class warfare / welfare budget. The drivers of the economy, businesses and high wealth/income individuals do all the paying, while those who choose to breed before they are financially responsible to do so get bailed out again. Its also a budget that scrapped policies that required little additional administration (such as changing a company tax rate) for things that require a large bureracracy to administer (such as means tested payments).

Given that the middle term budget is one of the few opportunities to make any real reform in a three year electoral cycle, its been squandered. I, and I suspect the majority of Australia, look forward to the next election.