The stock market is still looking rather sickly, and Sydney property prices remain flat. So where is one to invest? In the stock market and real estate!

And an article in today's Sydney Morning Herald states that "Fewer homes were built in NSW last year than any year since records began in the mid 1980s...which is expected to put further pressure on house prices and soaring rents." Recently the Australian economy has started to slow down, suggesting that the RBA's series on interest rate hikes has had the desired effect. If inflation moderates during the rest of 2008 we could start to see interest rates drop again towards the end of the year, possibly reinforced by an easing of the global credit crunch. That would provide the perfect launching pad for rapid growth in Sydney real estate prices. While real estate is hardly cheap when measured against incomes (so-called "affordability"), Sydney prices are relatively cheap compared to other markets (such as VIC, QLD and WA). I'd expect those markets to suffer a decline in real prices over the next few years, while Sydney is more likely to show some increase in real prices once the NSW economy improves.

"Fewer than one in five of the homes built nationally were built in NSW, despite the state needing to accommodate roughly one-third of the nation's population.

Nationally, 151,631 homes were built last year, the figures show. This is significantly less than estimates by economists of the need, which put the underlying demand for new homes at about 175,000 a year."

The stock market is also looking reasonably good value at the moment. One just has to look at a plot of the stock market index vs. company profitability to see that the recent sell-off has brought the market back from slightly overpriced (although no-where near the bubble of '87) to the sort of value not seen since 2002 - which was the perfect time to invest prior to the last bull run. I was sent an updated version of the chart below by ColonialFirstState which shows that after the index got well ahead of corporate profitability in 2007, the recent drop has brought the index back below the levels that would be considered "fair value" in relation to underlying company profits. 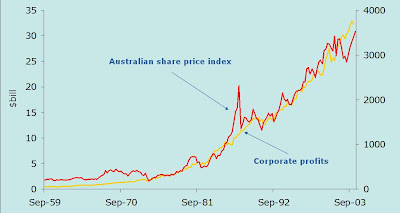 The recent market weakness also seems to have been excessive when viewed against the 200-day moving average, assuming that we are in period of temporary loss of confidence rather than a fundamental global economic problem that could see the stock market stagnate for many, many years like the 70's. 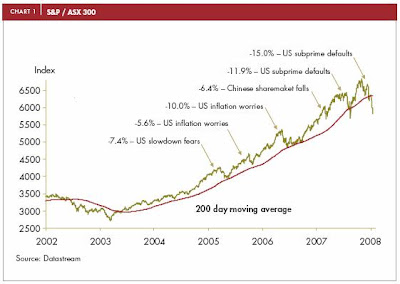 Having said all that, I'm already fully invested already and don't have spare cash flow to support any further borrowing to invest. Also, although I'm reasonably positive regarding the outlook for the Sydney property market I already have two properties in NSW, so any further purchases in NSW would be subject to property taxes of around 1.5%pa, which would take the gloss off any further real estate investments. So for the moment I'm just going to sit pat with my current investments and use any spare income to reduce my margin loan balances (which at current interest rates is a good strategy) and invest in the Vanguard HighGrowth index fund within my tax-sheltered superannuation fund via salary sacrifice arrangements.

There are without doubt some amazing bargains in the Oz stockmarket. It is possible to pick up quality companies with good prospects on PEs in the 6 to 10 range. And for those of us who need the income, a good few of these companies are offering very high dividend yields. But I think the best indicator of value is the fact that many of the stock investors I know have given up(the "blood on the streets" test).

I also live in Sydney - the property market here is a fascinating beast. It's very hard to tell what will happen given that property investment in Oz is so tax deduction and capital gain driven. Based on history you would expect the rising rental yields (and reducing interest rates) to push up investment/property prices but it may be that the Australian market might start to behave a little more like some of the other western property markets, where property investors seek to invest for income (positive gearing).

The stockmarket is my best bet for the moment but I'm certainly keeping a keen eye on the local property market.

PS. keep up the blogging