Tracking my Net Worth Performance against an iconic benchmark

Once you have an investment strategy in place, it is a good idea to measure performance - both in absolute terms and relative to a benchmark. Absolute performance measurements will let you know if you are 'on track' to meet your financial goals, and performance relative to an appropriate benchmark will let you know if you are implementing your chosen strategy effectively (eg. if your plan is to achieve a return of 1% more than the ASX200 index by investing in what you deem to be the 20 'best' shares in that index, you need to compare the performance of your portfolio to that benchmark - the ASX200 index).

I tend to not worry about benchmarking individual components of my investment portfolio, as my superannuation is invested in a mix of index funds, each of which already has appropriate benchmarks in place, and reporting of fund performance against those benchmarks. And my home valuation 'is what it is', as I'm not going to sell up and move to another suburb on the basis of how prices in our suburb move relative to the overall Sydney house price index.

Instead I benchmark my overall net worth against what I've decided is an appropriate 'stretch' benchmark - the minimum NW cut-off required to make it onto the Australian "Rich 200" list. That list was was originally prepared and reported annually by BRW magazine, and is now published by the Australian Financial Review. It takes a few months to produce, and normally comes out around May-June, based on valuations calculated in late March. This year the 'rich list' has been delayed until '4th Quarter' due to the market volatility that was occurring in March. 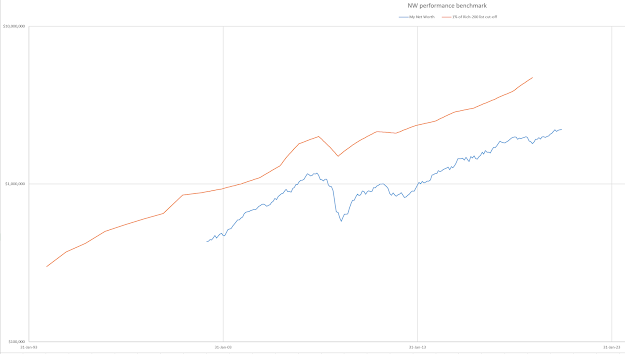 The reason that I've chosen to benchmark against the cut-off for the 'rich list' is that I assume that these richest Australians have reasonable expertise at building wealth. By taking the cut-off (net worth of the 200th richest Australian, whoever that happens to be) I eliminate much of the random variation that occurs at the top of the list (which often depends on how a particular investment/company is performing). And because Australia's population is increasing over time, the 'rich list' is getting more exclusive (a smaller percentile of the population) over time, so the cut-off will increase relative to the 99th percentile for example.

As the cut-off net worth for the rich list is still vastly higher than my net worth will ever be (I'll never be on the 'rich list'!), I've chosen to benchmark my net worth against 1% of the rich list annual cut-off. Plotting my monthly net worth (excluding the lake house I 'inherited' a few years ago) against this benchmark shows that I've generally been tracking quite closely to that benchmark, with the exception that my net worth did relatively poorly during the GFC due to my gearing having to be unwound at the market bottom to avoid margin calls - and then not having the confidence to gear up again to my previous level when the stock markets improved during the following decade.

When the annual rich list is published later this year it will be interesting to see when I've made up any ground against the benchmark - hopefully the market timing I attempted with the asset reallocation during the first half of 2020 will have boosted my relative performance.

Posted by enoughwealth@yahoo.com at Thursday, July 16, 2020