The positive performance of the Australian and global share markets during June resulted in my geared share portfolio gaining $22,317 (10.34%) and my superannuation savings rising by $40,058 (3.88%). I don't have new sales data for calculating our house price estimate this month, but the overall Sydney property market data showed practically no change in average prices during June, suggesting that the market has 'bottomed out' in response to the RBA lowering interest rates (which flowed on to home mortgage interest rates) and the election result ruling out the proposed changes to negative gearing that had been Labor policy. While most pundits don't expect a strong rebound in house prices during the remainder of 2019, I don't expect out home price estimate to be a major drag on my NW during the financial year (and may even have modest gains during 2020).

My NW estimate $2,336,288 rose $62,606 (2.75%) during June and has recovered to be within $2,500 of my previous all-time-high (in August 2018). While dropping interest rates suggest that the economy is weak (a negative for the prospects of the stock market), on the other hand they make dividends more attractive relative to bond yields, which may support stock prices. Hopefully the tax cut legislation will be passed this week, which should provide some economic stimulus during the latter part of 2019, and should help bolster consumer sentiment despite the ongoing lack of any significant real wage growth. 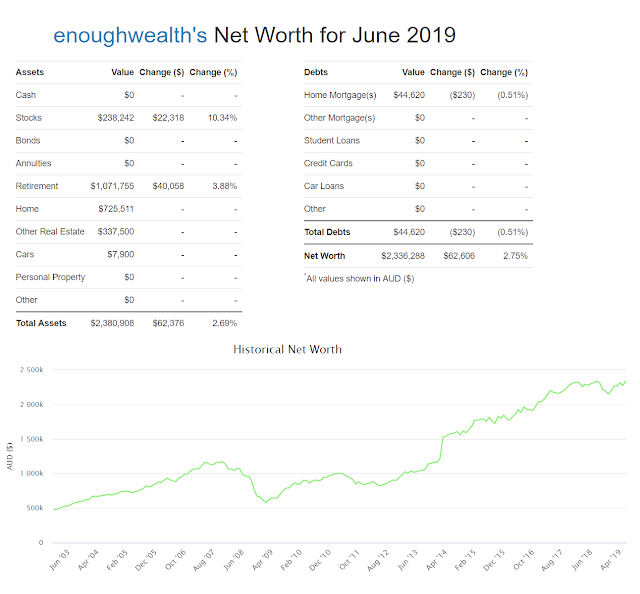 Now house prices are dropping in Canberra instead...

Considering the movements over the past 12 months (Canberra avg house up 2.41% YoY, Sydney avg house down -10.77% YoY) that's hardly surprising ;)