Why Global Warming Activists are targeting developed countries for Ideological reasons, and not scientific reasons

Here in Australia we are in the midst of a Federal election campaign, and one of the biggest issues of concern to the electorate (quite rightly) is the global warming crisis. Leaving aside the fact that it is a global issue, so international agreement rather than changing your local member is the only effective way to address the issue, the issue is tending to favour the parties on the 'left' (Labor and the Greens) at the expense of Conservative parties.

On the one hand this makes perfect sense, as global warming is an issue where being progressive and 'taking action' is the only way to solve the problem - being conservative and resisting change ('do nothing') is a recipe for disaster.

Unfortunately, the change being pushed by leftist parties is based on pseudo-scientific justification for their neo-communist, anti-western/capitalist policies. They use the raw 'per capita' emission data as an excuse to lay the blame for global warming entirely at the feet of developed countries, while the reality is that the root cause of the global warming crisis was (and is) global overpopulation. While one person using air conditioning and driving an SUV is bad for the environment, ten people doing so is ten times worse!

The ‘elephant in the room’ with regards to global warming causation is total carbon emissions, and this rise is mostly due to population growth (especially in third world countries), NOT due to the increase in carbon emissions per Capita per se: 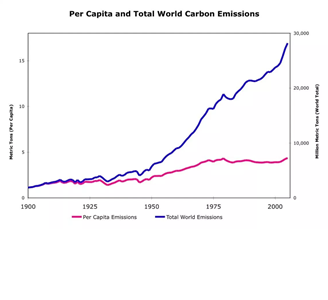 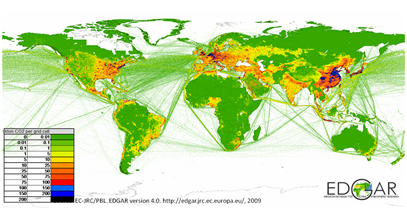 This shows the total fallacy, and ulterior motives, for Green groups pushing the usual ‘per capita’ propaganda: 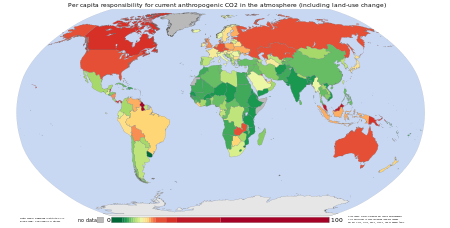 By choosing to frame the global warming debate purely in terms of the scientifically invalid ‘per Capita’ measure (which they justify using a spurious notion of ‘fairness’ - make the rich pay), they can ‘prove’ that global warming is entirely due to the big, bad capitalist developed countries, and give the true source of the global warming crisis for the next fifty years – China and India - a free pass.

While this will undoubtedly achieve the Labor/Green goal of Robin Hood economics (steal from the rich and give to the poor), it is also a recipe for global climate disaster. The developed countries are going to spend a fortune on achieving heroic 'per Capita' emission reduction targets, while the developing countries and going to both a) not have to meet the same 'per Capita' targets, and b) also continue to stoke the engine driving climate change - unsustainable population growth.

In fifty years time my children will be suffering from the impacts of global warming, in world with a population having grown by around 50% above current levels - to around 10 billion. And I'm pretty sure the left-wing parties will still be blaming the problem on 'insufficient action' by developed countries, and not on the extra 2.5 billion people added to the global population in the interim.

There are lots of ways of breaking down the change in total emissions, some more useful and others. You are right to point out that population growth is important, but then pivot to blame China, yet the population growth rate of China is less than either the US or Australia. The increase in absolute numbers is higher, but China has done more than any other country to try to get their population under control.

The usual way of breaking down energy related total emissions is using the Kaya Identity where:

Then the most useful question to ask I think is which of these is the easiest and most sensible to change. World population growth is slowing down - but it is the hardest to change, especially due to the long life of people, there is a lot of momentum built in. It’s not desirable to reduce GDP per capita and hard anyway. Energy per $ GDP sounds like a good option and the decline in this ratio has helped a lot but I think actually it is tough to get it to decline faster than it has due to something called the rebound effect. So that leaves decarbonising the energy supply. It makes sense to target that most in the countries that develop new technologies such as the US, China, Europe, Japan, Korea. If these countries develop new cost-effective energy technologies they will be adopted elsewhere as well. The same way lead free petrol is what is used everywhere now because you can only buy cars that run on lead free petrol. This can be achieved most efficiently through a mix of carbon pricing and research funding.

The biggest contribution that developing countries can make in the meantime is slowing down deforestation such as burning peatland in Indonesia and yes trying to reduce population growth as much as they can. Yes, objectively what Australia does doesn’t matter a lot except symbolically.

Yes, China did a lot to get their population growth rate under control (I doubt it is more than any other country though, given that some countries like Japan now have negative population growth rates), but the combination of a massive population increase over the past century and now a rapid increase in GDP/living standard accounts for the fact that in the Carbon emissions per land area chart they are the stand-out problem area.

Anyhow, I was mostly pointing out that the 'per Capita' measure is used more for its ideological efficacy to promote a 'hidden agenda' than its scientific validity. And that in the 'climate change impact' charts it should be countries such as India and China that should be 'red' and not countries like Australia. If you doubt this, simply model the impacts of a 10% increase vs. a 10% decrease in total carbon emissions by each of these three countries on global climate change, and see in which countries changes in carbon pollution levels really matter...

I also think that while focussing on controlling global population growth would have be an effective way to minimise global warming if it had been undertaken in the 60s (the 'club of Rome' report and the ZPG movement unfortunately ended up not having much impact), it is now far too late for that option (and yes, it would have been difficult, but for social/religious reasons (that can be overcome with sufficient political will), rather than economic/technological reasons. I was simply pointing out that in 50 years time per Capita carbon emissions levels will have dropped considerably, but due to population growth the absolute level of carbon emissions worldwide is likely to continue on an upward trend regardless -- but it will be the lack of action by 'developed countries' that is blamed, not the growth in world population.