My daily air pistol training sessions (~1hr every evening using the SCATT for 'dry fire' practice) seems to be slowly improving my results. I've been tracking the summary results from my SCATT sessions and my weekend shoots at the local air pistol club, and there seems to be a trend towards better scores. Aside from strengthening the specific muscle groups used to raise and hold a pistol steady during an hour, I presume the result is mostly due to improved hold (a somewhat smaller arc of movement, as shown by the SCATT 'trace length' graph) and more consistent trigger release (few 'wild' shots resulting in 8s or 7s due to trigger 'jerk', and hence more 10-shot 'cards' that end up with scores in the low 90s, rather than in the 80s).

The plots below (on the left) show histograms of 'card' totals for the first, second and third sets of 20 practice and club match shoots. They show that when I first started shooting regularly a couple of months ago I was often having a 'card' with a score in the low 80s. By the second set of twenty sessions I had reduced the number of 'bad' cards considerably, and was mostly shooting in the low-mid 90s, with a handful of cards in the 95-97 range. The third set of twenty sessions (which is still in progress) shows that although I am still having the occasional bad card (below 90) on an 'off' day, I have increased the percentage of cards in the 95-97 range to the extent that it is almost the same as the percentage of cards falling into the 89-91 range. My end goal would be to shoot nearly all cards in the 92-94 and 95-97 range, and occasionally get a card of 98-100.

At the national championship level, shooting all 95-97 or better per 'card' is required. And at world championship level nearly every series of ten shots would have to be 97 or above to even make it into the finals!

A review of some SCATT traces from last night's practice session shows where I still need to improve my shot consistency. The first plot  below shows what a typical  'good' (for me) shot looks like - with a small AM (the 'hold' area in green) settling well within the 9-ring, and the final second (yellow trace) lying mostly within the 10-ring, and then the trigger release (blue line) being smooth and not displacing the point of aim. Ideally the follow through' (red) trace would show that I maintained my hold until after the shot away. 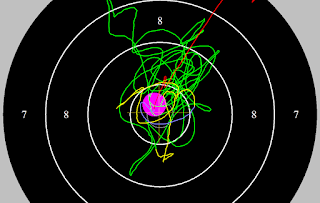 The second trace shows a more typical shot, with a larger AM (more wobble in my hold), possibly due to slight changes in stance, grip, breathing etc. resulting in a '9'. 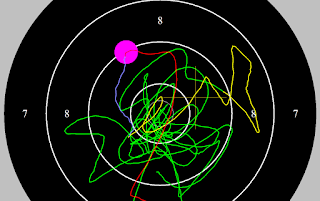 The third trace shows the problem of occasional trigger 'jerk' that I need to eliminate - while the AM was OK, I must have consciously tried to 'pull' the trigger at the instant the sight picture was 'perfect', and as a result the more abrupt trigger motion upset my sight alignment and threw the shot into the 8-ring. To win competitions I'll need to work on my trigger release and completely eliminate such 'wild' shots. And of course it is a lot more difficult to achieve this during the stress of a competition than while calmly practicing at home! 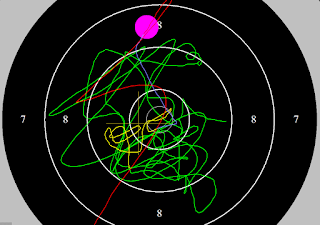 At least my regular practice is slowly improving my AM and hence my scores - as shown in plots of SCATT trace length (a measure of how much 'wobble' is in my hold), and SCATT average shot score.

So far I've been doing some SCATT training most days, but I haven't yet got back into the habit of doing daily 5BX exercise sessions, or started doing any isometric or weight training. To maximize my performance I'll need to work on this during 2017. I also need to work on my mental state during competitions - too often I find myself thinking about previous bad shots, or worrying about how my score is progressing during competition, rather than calmly executing each shot in the same manner I do during practice sessions.

Hello, here is a link to scatt-database : https://scattdb.com. It’s a website where you find a collection of SCATT Pro files. You can also upload your files and share with other your SCATT session. It’s practically like SCATT Pro software but online. And you can download a raw CSV file with your shots data.