My estimated net worth at the end of June had decreased considerably (-$39,299) compared to the previous month, despite three months' worth of superannuation contributions being deposited into my retirement account during June. The decrease was due to global and Australian stock markets showing weakness during the first half of June, and then having a couple of really bad days at the end of the month due to the 'Grexit' uncertainty.The only positive contribution during June was the continued rise in the estimated valuation of our home, which increased by another $9,328 (+1.54%).

Our three year fixed-rate home loan matured at the end of June, so I transferred $50,000 from my available 'portfolio loan' credit limit to pay that amount off our remaining home loan balance. This was to match the $50,000 payment DW made using funds from the sale of our investment property last year that she had invested in a term deposit until our home loan fixed rate period ended.

During the month I bought a few additional shares in NAB and IFL to add to my existing holdings - the NAB shares were via the rights issue, and the IFL shares were bought after recent bad publicity caused the stock to drop more than 10%. Hopefully in the longer term these will both be sound investments.

Overall, any major future rise in my net worth will depend on whether or not our home gains substantially in value if the area gets 'rezoned' by the local council later this year (for medium density housing around the new hospital site), and when (if) the Australian stock market eventually recovers to pre-GFC levels (unlike the US stock market, the ASX-200 is still considerably below the peak of about 6800 reached during 2007). While I continue to save a large fraction of my salary via superannuation 'salary sacrifice' the amount often seems insignificant compared with the monthly changes in net worth caused by market fluctuations. The 'plan' is that enduring these fluctuations ('risk') will eventually pay off via better returns in the long term compared with less volatile asset allocations. 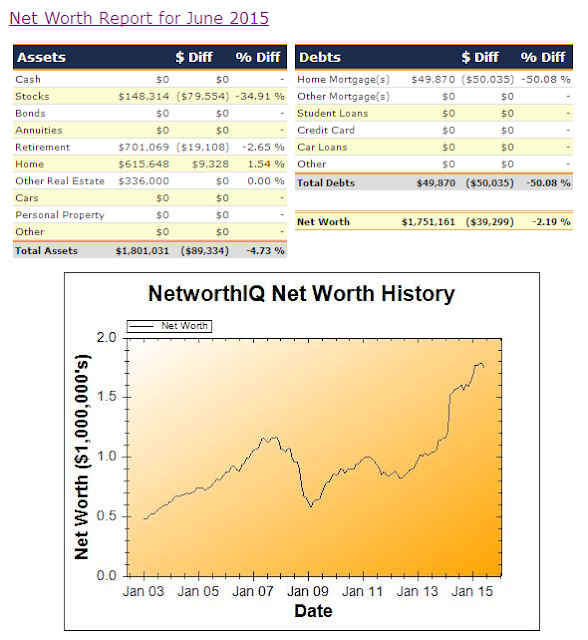