While some parents apparently take the view that the 'best' selective high school is simply the one with the best HSC results (usually taken to be the % of their year 12 student cohort on the HSC DA list), this ignores the fact that the 'best' year 7 students will, generally speaking, go on to achieve the 'best' HSC results six years later. So the selective school with the highest Year 7 entry cut-off mark (James Ruse) will get the highest percentage of students making the 'distinguished achievers' list even if there was absolutely no difference in the quality of teaching etc. between the selective high schools. What is of more interest is whether or not there is a difference in how well individual selective high schools are helping each student achieve their 'personal best', based on their individual potential.

A more considered indicator of which selective high school is 'best' (in some sense) might therefore be which one 'value adds' the most during a student's secondary schooling? One way to measure this (that schools use internally, but few schools are game to make public) is how the NAPLAN results for a cohort change from Year 7 to Year 9, compared with the typical change for 'similar' schools. However, as NAPLAN testing stops in Year 9, a better indicator of a school's influence over the entire secondary school period might be to look at HSC outcomes (%DA) vs. the cut-off entry mark into Year 7 for the that cohort of students. While there is some movement of students between schools from Year 7 to Year 12, selective school students generally tend to stay at the school they gained entry to in Year 7, and the relatively small number of additional students admitted in Years 8-11 would probably be a similar standard to the general school population.

As the Year 7 entry cut-off marks for NSW selective high schools were only published from 2008 onwards, the HSC results from 2013 and 2014 can only now be used to plot the correlation between Yr 7 entry cut-off mark and the performance (in terms of %DA in the HSC) of that cohort when they reach Year 12. To date there are only two years data available (2008>2013, and 2009>2014), and it will be interesting to see if the trends apparent in this limited data set hold in future years. {update: see post with more recent data - here}

The results for thirteen NSW selective high schools that are generally ranked in the 'top ten' (in terms of entry cut-off mark) are plotted in figure 1 below. It can be seen that there is a clear correlation between the cut-off mark required for entry into each school and the percentage of these students that perform well enough to make the HSC 'distinguished achievers' list when they get to year 12. While some scatter is to be expected, the points above the trend line would suggest a school has 'added value', while those schools/years falling below the trend line appear to have under-performed in the HSC relative to the potential they exhibited going into Year 7.

The scatter show in figure 1 increases as entry cut-off decreases. This is to be expected as there is greater potential for year-to-year variation in the average ability of a cohort entering a school with a lower cut-off mark. While the cut-off mark might be the same in 2008 and 2009, the cohorts in a selective school with a lower cut-off mark could vary considerable if in one particular year a few more students with high selective school entry test scores choose to attend the 'lower' ranked school due to travel considerations etc. This wouldn't change the minimum entry score required to be accepted into the school, but could boost the % of students making the DA list. 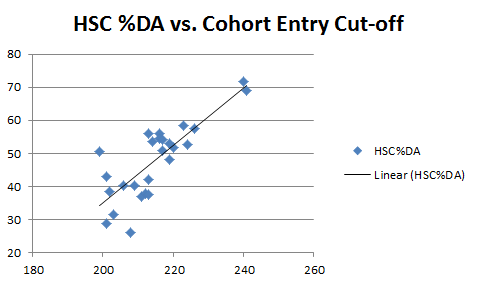 Figure 2 shows the data grouped by gender segregation - the selective boys schools, the selective girls schools, and the selective co-ed schools. From this figure it appears that there is little impact of gender segregation in years 7-12 and student's HSC performance. The couple of data points for boys and co-ed selective schools that appear significantly below trend belong to three specific schools, so are more likely to be due to the schools 'value add' than to gender segregation effects. If that is the case, one wonders if it is such as good idea to segregate students on gender lines during high school. Getting them acclimated to interacting with the opposite sex during high school may be better than leaving it until the booze and party enhanced environment of your typical university campus! 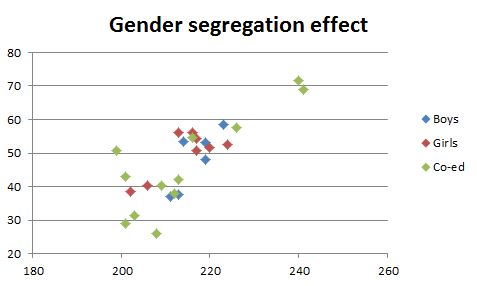 Finally, figure 3 shows the data colour coded to each school. It appears (although it is hard to draw solid conclusions from only two data points) that some of these selective high schools (Girraween, Sydney Technical High School and Normanhurst) under-perform, while others (such as Manly Campus and North Sydney Boys) may out-perform. Such trends will become clearer as HSC results for 2015-2017 are published in future years. In the case of Sydney Technical High School the relative under-performance may simply be because students choosing to attend that school are more interested in technical subjects that do not 'scale' as well as some other HSC subjects (due to the general composition of students taking that subject across all NSW high schools). 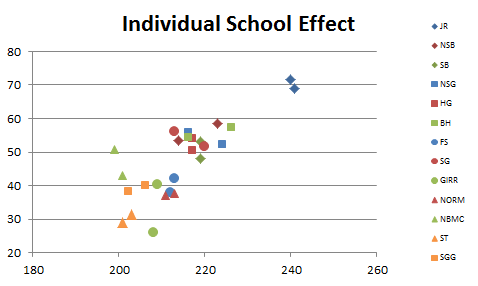 It should be noted that these results are Sydney-centric, as there is a greater pool of students within reasonable traveling distance of the Sydney selective high schools, which pushes up their cut-off marks for entry. Selective high schools in country areas tend to be in lower demand, so their cut-off marks tend to be lower. This would mean there is more year-to-year variation in the average ability of the student cohort, independent of the cut-off mark, making it harder to tell if a particular school in these areas is performing above or below trend from the available data. Hopefully BOSTES uses their access to the median entry score of students in these schools and their eventual HSC results to identify which school are achieving the best outcomes, and identifying which variables (such as teacher qualifications, experience, school resources, student socio-economic background etc.) are important, and which positive factors can be promulgated to other schools.