Although my old (2008 vintage) Dell Inspiron 1525 is still going strong (with a bit of help from a recent RAM upgrade), I was getting some funny looks from my supervisor and postgrads every time I unpacked it at the astrophysics department ;) I can't really justify buying a new laptop as most of my 'number crunching' is being run on a uni workstation (via a remote connection), but there is a data reduction package I recently installed on the laptop which probably needs a more powerful system to run on, and there is some observatory remote-control software that probably wouldn't even work on my old laptop.

So after a bit of indecision I eventually decided to take advantage of Dell's End-of-financial-year clearance sale to buy a reasonably 'high end' laptop - an Inspiron 17R SE ('special edition') for $899 (about 35% off the RRP, and $500 dollars off the usual price). The 17R SE comes with a fairly stylish anodised and textured aluminium cover plate and interior, back-lit keys, and an 17.3" 1920x1080 FHD display. The CPU is an Intel i7 quad-core running at up to 3.4 GHz, and the system has a 1TB SATA HDD and 2GB of separate video memory. On the downside, this desktop-replacement 'laptop' weighs more than 3kg and looks fairly 'chunky' compared to an ultrabook (it's about 1.5" thick at the back). This form factor probably wouldn't suit a petite lady, but it suits me and will just squeeze into my current aluminium laptop case (a sub-$100 Dicota knock-off of a $300 Halliburton case). Although I've seen the 17R SE configured with a 32 GB SSD, a SSD doesn't appear to have been included in my particular variant (hopefully I can add one as an upgrade in a year to two when SSD prices drop). The 6-cell 48 Whr battery only lasts around 2-3 hours (unlikely to be an issue for me, as I nearly always use my laptop plugged in to a power point). And the model I bought comes with a DVD drive rather than the BlueRay that's available on the more pricey versions, but I don't think I'll miss that as I don't even own any BlueRay discs. The 17R SE comes WiDi built-in, which might someday become useful for making presentations if WiDi ever becomes widely adopted, but the specs say that it requires 'Intel graphics' so the WiDi may be disabled in this model.

When I ordered online on Monday afternoon my order was confirmed by email as soon as my payment had cleared, and it was already with the courier service later that afternoon. Although it was initially scheduled for home delivery between 9-5 on Thursday, there was already a 'missed delivery' card waiting on my porch when DS1 got home from school today. So I'll phone the delivery company in the morning and get the package redirected to my office address.

The 17R SE I bought was initially listed as being on sale until 27/6, but when I checked today it had already sold out. A similar 17R SE model that is now on 'clearance sale' costs $500 more ($1299) and only has an i5 CPU, so I'm quite happy with my decision to make my purchase on Monday. 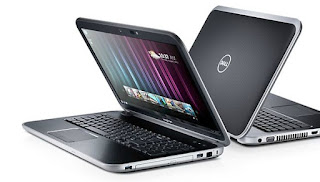