Many years of stock market investing have proven to me that I am unable to 'pick' individual stocks that will out-perform, and I also can't 'pick' individual funds or fund managers that will consistently out-perform the general stock market (assuming that such funds or fund managers actually exist - there is a body of evidence that suggests that hardly any funds or fund managers 'beat' the relevant index after taking fees into account, and that the few that do are probably the result of random chance rather than intrinsic skill). However, having decided to (mostly) stick with investing in 'the index' (or in the case of our retirement savings, investing in a mix of indexes via the Vanguard 'High Growth' index fund that provides some automatic, low cost, rebalancing  between the various 'growth' indices - Australian shares, International shares, property, bonds etc.) I'm still left wondering if there is some way to 'time' alterations to our investment portfolio. Such as deciding when to be 'fully invested' (or even 'geared' into investments) and when it might be prudent to eliminate gearing or even move partially into 'risk free' investment in fixed interest.

As the stock market is, broadly speaking, a measure of a nation's private wealth-creation, it would seem plausible that the total stock market (eg. the 'all ordinaries' stock market index, XAO) would be correlated to the nations per capita GDP. And, indeed, a plot of this data (obtained from http://www.measuringworth.com/datasets/australiadata/ by selecting the 'Australian Nominal GDP per capita' and 'Australian Stock Index' options for the period 1950 to current) on a logarithmic scale, show that the XAO generally moves in line with the per capita GDP. 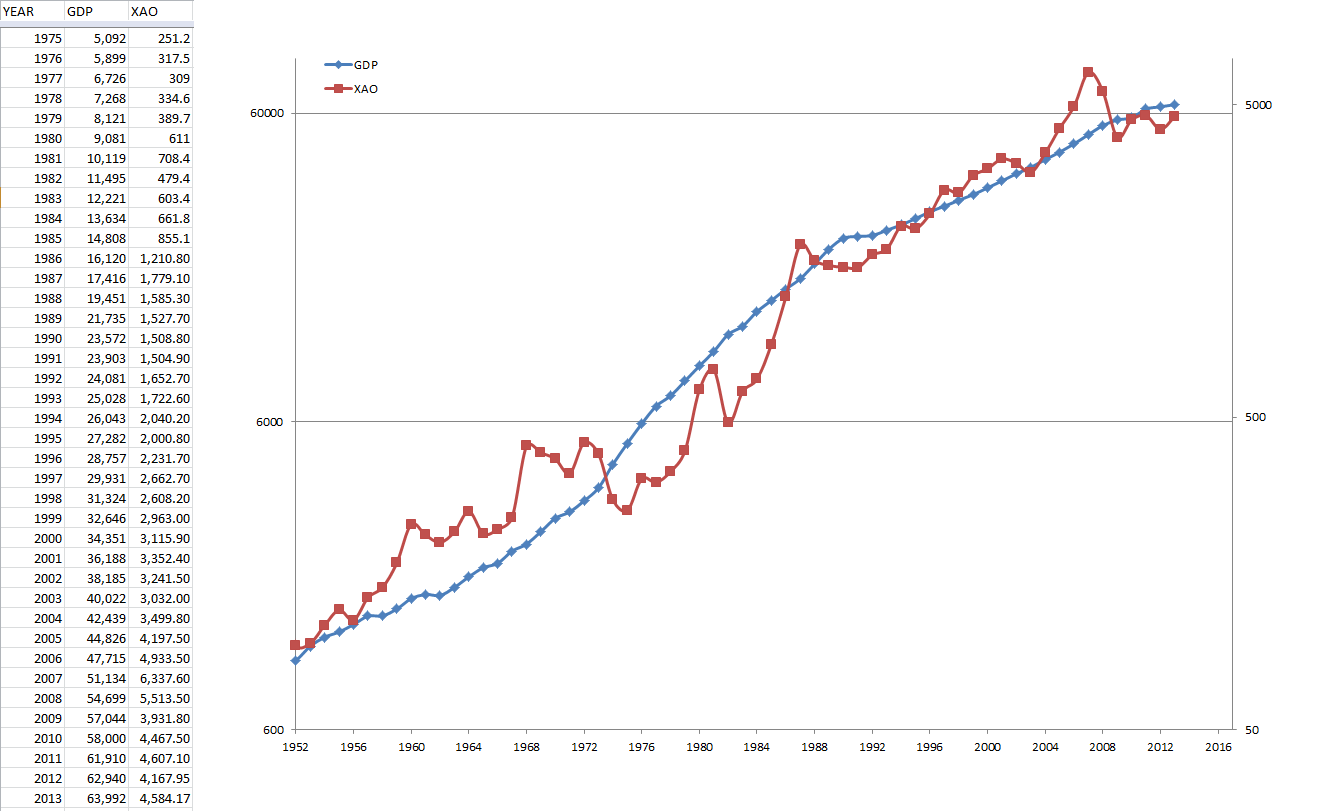 What is most interesting is that from this chart it seems quite obvious when the stock market was 'fundamentally' over-valued in the post-WWII period (such as in the late 1960s, in 1987 and in 1999-2001 and again in 2005-2008). The plot suggests that it was a very good idea to reduce leverage/gearing or even to short the market during 2007 to protect against a major correction (my biggest investing cock-up was failing to roll-over my index put options in late 2007), and that at present the Australian stock market isn't particularly over-valued. Indeed 2009 and 2012 look as if the were probably good times to be investing in the Australian stock market.

As I'm already fully invested (and with a bit of gearing into Australian stocks outside of our superannuation investments) the graph doesn't really provide me with much immediately useful information. But such a plot may help 'ring the bell' the next time the stock market is 'expensive' and it is a good time to move my asset allocation towards cash and fixed interest investments. It may also be a good tool for my sons to use when managing their investment asset allocation over the coming decades....

Well, of course its not quite as good as it sounds, but, if you open a new ANZ Acess Advantage account before the end of this month (31 August 2014) AND deposit at least $2000 into the account by the end of next month (30 September 2014) AND log in to ANZ goMoney or online banking before the end of next month (30 Sep) THEN you will receive $100 from ANZ. Which, assuming the $100 is deposited soon after the end of September, means you could earn $100 on your $2000 deposit within two months and then close the account^ you would achieve an annualised return of more than 30% pa on that $2000 deposit!

To apply online you can visit http://campaign.anz.com/bank-accounts/everyday-offer/

Not too shabby considering the online application process only takes a couple of minutes to complete, and, presumably, you can deposit the $2000 into the new account via EFT. The process was relatively painless because I am already an ANZ customer (via our SMSF bank account), so I probably don't need to visit a branch to satisfy the 100-point ID check that would be needed if you don't have an existing relationship with ANZ bank.

The account is available to persons over 12 years old, so I may also let DS1 know about this offer - a much easier way to earn $100 than spending two hours busking or a week of early morning newspaper round.

Subscribe to Enough Wealth. Copyright 2006-2014
Posted by enoughwealth@yahoo.com at Saturday, August 09, 2014 No comments:

After being told late last month the our company's annual pay review (that was normally conducted every June under the previous ownership) would be deferred until Dec/Jan to bring it in line with the US parent company procedure, it was announced last week that we would all be getting a 'cpi' increase of 3% back-date to 1 July, and that there will be also be an official round of 'pay and promotions' reviews done in December. While the amount of money involved isn't large, its a relief to see that the change in annual performance and salary review scheduling isn't being used to implement a 'de facto' pay freeze.

Subscribe to Enough Wealth. Copyright 2006-2014
Posted by enoughwealth@yahoo.com at Sunday, August 03, 2014 No comments:

This month's net worth calculation is slightly less accurate than usual as the stocks figure was negatively impacted by a significant capital return (of around $10,000) from IPE (I don't include my cash account balances or current credit card balances in my monthly calculation as they generally have little net effect). In addition, the estimated market valuation for our home was not updated as the average sales price data for our postcode was not available this month, so I used the same figure as last month. In reality there is likely to have been an increase in the estimated valuation of around $15,000 based on the RPData average sales price index for our city. 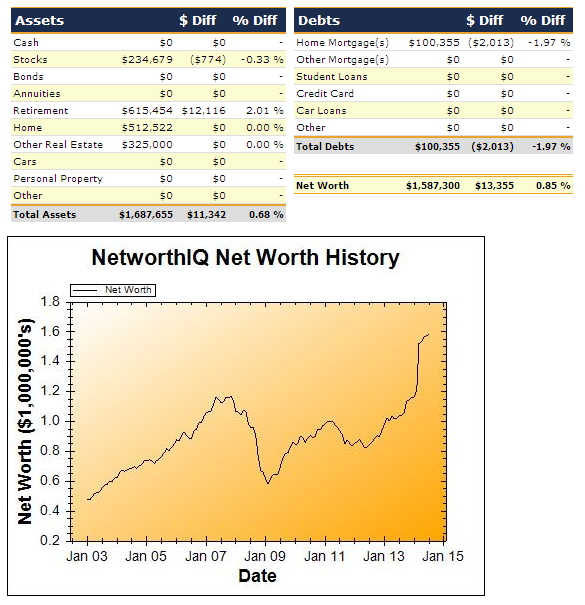 Subscribe to Enough Wealth. Copyright 2006-2014
Posted by enoughwealth@yahoo.com at Saturday, August 02, 2014 No comments: